However, Nolan says the issue is not that she isn’t a skilled baseball analyst but rather that baseball fans are simply sexist.

“They’ve been, let’s say, a little hesitant to welcome in your girl with open arms. I’m experiencing a lot of things I thought I was past in my career,” Nolan said on the GoJo podcast.

“You kind of think, OK, I got through the misogyny. I dealt with it. Now I have an Emmy. I’ve been here for a minute. I’m not gonna have to deal with it, and then boom, it comes right back.”

Playing the they are mean to me because I’m a woman in sports card doesn’t work here.

Jessica Mendoza, a woman, is a color analyst for MLB on ESPN, and baseball fans rave about her analysis. She’s great at her job. Baseball fans are critical of Nolan’s performance because she’s unconventional, not because she’s a woman.

Nolan is correct in that “baseball [is] not big on change.”

Baseball fans are older and creatures of habit. They complain relentlessly on Facebook during the postseason when they have to consume a broadcast on ESPN, TBS or Fox instead of the local affiliate that they spent the summer watching. Joe Buck is the most hated person online during the playoffs, as a result. 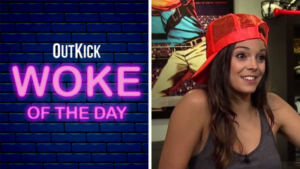 So when Apple puts a distracting social media star with no baseball expertise in its booth, of course, viewers will shout in fury.

And that’s not a knock on Nolan, who is a talented TV talent. MLB viewers would react the same way if Apple would put a male commentator with no baseball expertise in the booth.

This is not a matter of misogyny. It’s a story of Apple programming in a way that’s not suited for the baseball base.

Keep in mind that baseball fans are already cranky that they had to learn what an AppleTV+ is to watch the game. So hearing Nolan on the call is just an extra irk.

Katie Nolan, one of the most privileged personalities in sports media, is declaring herself the victim yet again. That earns her the OutKick Woke Hack of the Day award.