Finally, Joy Reid is the winner of the OutKick Woke Hack of the Day. How did it take this long? 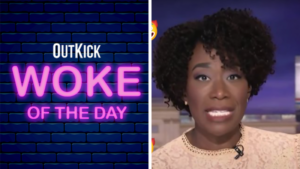 The most radical, and racist, person on television is having quite the run. To recap:

— Her MSNBC primetime show will record its least-watched month ever in April. ReidSideways is down 31 percent from last April and 51 percent from 2020. It’s the fastest-dying program on cable news.

— Her show is losing so many viewers that CNN has overtaken her during the 7 pm hour. That’s embarrassing. She’s making CNN win.

— Former NFL safety Jack Brewer says he is suing Reid for defamation for the following comment:

“This mis-use of black boys is tantamount to child abuse. I would really like to hear the back-story on who these kids were and how they wound up at a DeSantis event. Given how anti-black DeSantis is, using Black children this way is extra sick,” Reid said about Brewer after partnering with Florida Governor Ron DeSantis for an anti-CRT event.

— Reid couldn’t find anything interesting to say about Elon Musk purchasing Twitter, so she took a swing and struck out.

“Twitter is not the government, they are a private company that says you’re not allowed to be a Nazi on Twitter. Elon Musk, I guess he misses the old South Africa in the 80s. He wants that back.”

Uh, what? He misses the apartheid?

—  MSNBC colleagues now describe her as “unmanageable” and a complete liar. No surprise there.

MSNBC is probably too afraid to fire Reid at the risk of her calling the entire network racist. Still,  she’s worthless on television.

Joy Reid is the worst “talent” in an industry with former television host Keith Olbermann and current “journalist” Taylor Lorenz.