Another day’s gone by, which means that more people are calling on the Big Ten and their commissioner Kevin Warren to un-cancel the football season. The latest voices include Ohio State quarterback and Heisman Trophy finalist Justin Fields, and 81 parents of Nebraska football players.

Justin Fields penned a petition on moveon.org on Sunday, and it has already garnered over 225,000 signatures.

“We, the football players of the Big Ten, together with the fans and supporters of college football, request that the Big Ten Conference immediately reinstate the 2020 football season,” Fields wrote. “Allow Big Ten players/teams to make their own choice as to whether they wish to play or opt out this fall season. Allow Big Ten players/teams who choose to opt out of playing a fall season to do so without penalty or repercussion.”

“We want to play,” Fields’ petition continued. “We believe that safety protocols have been established and can be maintained to mitigate concerns of exposure to Covid 19. We believe that we should have the right to make decisions about what is best for our health and our future. Don’t let our hard work and sacrifice be in vain. #LetUsPlay!” 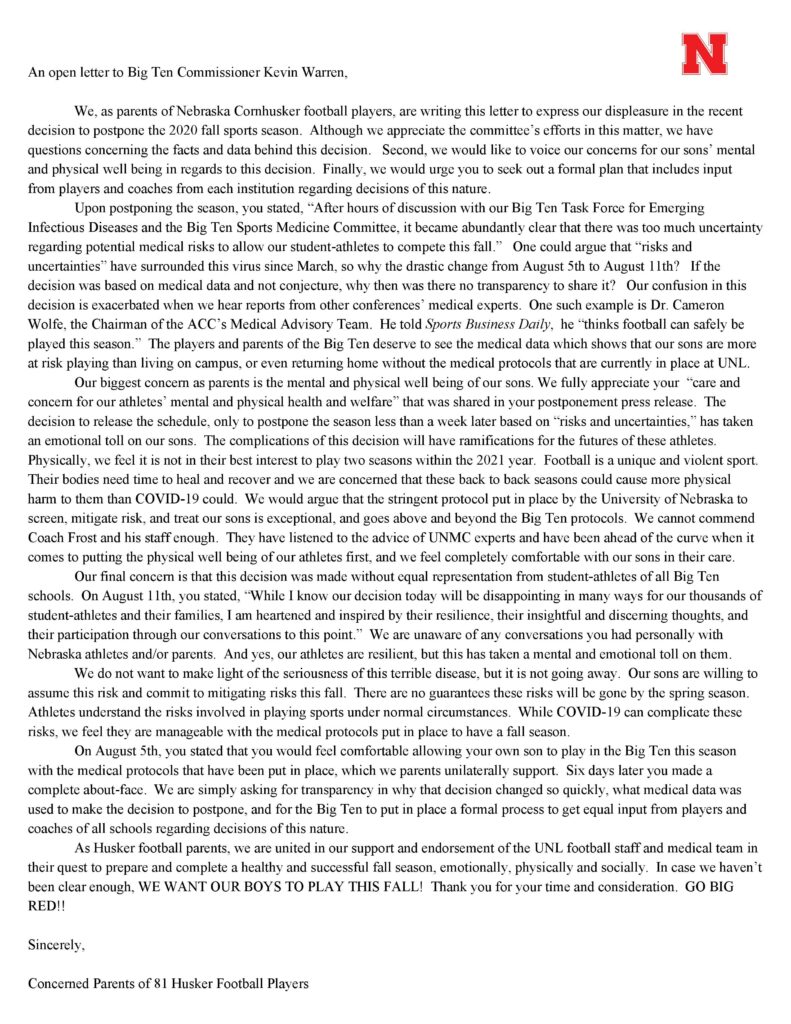 As I wrote on Sunday: Outkick has been banging the drum all week that the Big Ten and their lapdog followers in the Pac-12 acted haphazardly. The Big Ten made their decision to cancel the season about five minutes after they released their schedule. Parents of football players at Iowa, Ohio State, and Penn State have asked Big Ten commissioner Kevin Warren to reconsider. A University of Michigan cardiologist essentially says the conference relied on a study that has more holes in it than a 1972 Grateful Dead tour t-shirt.

The Big Ten canceled their season so early that perhaps they could undo it. What that would functionally require, though, is for Ohio State to reverse course from what athletic director Gene Smith said about not playing elsewhere and preparing for a Spring season. (As we’ve said numerous times, a Spring season is a pipe dream — it will be flu season in Big Ten country, a vaccine is unlikely to be available to young/healthy athletes, and playing 18 games in a calendar year is irresponsible.)

If Ohio State throws their institutional weight around un-canceling the season, the Big Ten would have to listen. Ohio State generates FAR more money for the conference than they extract. As a sidenote, it’s absolutely insane that their vote counted the same as Maryland and Rutgers in this equation. That would be like if California had the same amount of electoral votes as South Dakota or Wyoming.

As SEC commissioner Greg Sankey has said, it’s too soon to make a sweeping declaration that the season should be canceled. Maybe it will be the case later that the season just cannot be played, but right now, especially in light of the new saliva test, the Big Ten and Pac-12 acted too haphazardly.