Save your Nick Nurse, Mark Jackson and Doc Rivers hot takes. None of the three are fit to be the Lakers’ next head coach. The perfect man for the job, Juwan Howard, resides in Ann Arbor, Michigan and has already been rumored to be a candidate.

But why Howard, who spent six seasons as an assistant with the Miami Heat before taking over as the head coach of Michigan in 2019?

Simple: After two consecutive disappointing seasons, including a 2021-22 campaign that OutKick founder Clay Travis calls “an unmitigated disaster,” the Lakers need someone to slap some sense into both their front office and their roster.

Enter Howard, whose most memorable Michigan moment took place in February when his hand met the face of Wisconsin assistant coach Joe Krabbenhoft in a postgame handshake line, a one-sided love tap that was the country’s most talked about instance of hand-to-face combat — at least until Will Smith said “hold my beer” at the Oscars in late March.

Juwan Howard is a name to watch for as a potential head coaching candidate for the Lakers vacancy.

With Howard at the helm, the Lakers’ season would either end in a title or on the cutting room floor. Either way, someone’s buying that script, and they’re casting Will Smith in the very believable role of the head coach. After all, Smith has experience in both comedy and drama, perfect for any team featuring LeBron James.

Now that we mention it, doesn’t Smith have an uncanny resemblance to Howard? 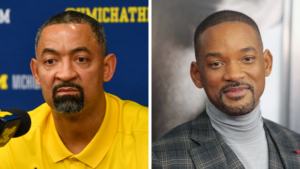 And anyway, Howard himself is used to the spotlight. He was a prominent member of the Fab Five, arguably the most highly publicized college hoops team of the last 30 years. So it’s unlikely the glitz and glamour of Los Angeles would shine too brightly for the 49-year-old coach.

And even if they did, who wouldn’t want to watch a little more slapstick comedy?