The Great Villianess of Big Ten fans everywhere, Michigan Governor Gretchen Whitmer, has officially spoken on the conference canceling fall football and is “glad” at the direction taken by her partner in villain crime, commissioner Kevin Warren.

“I was glad that the Big Ten took the leadership role that they did,” Whitmer told members of the media on Monday, MLive reports. “Obviously they’ve got huge universities and they’ve got people who are on all of these campuses that are working to try to address the COVID pandemic that we’re all struggling with.”

“Football is a very intimate sport where you are up in one another’s faces,” Whitmer added. “That’s what makes it inherently risky, so that’s my concern. I love football. I wanted to be a sports broadcaster. I don’t like not seeing football this fall, but I’m glad that the Big Ten took the leadership they did and the (Michigan) High School Sports Association did as well.”

Let’s cut to the chase here: she’s GLAD the Big Ten season is canceled. She’s glad her villain friend Kevin Warren stepped up and made it happen and this will not be forgotten down the road when it comes time for political allies to scratch each other’s backs.

Ohio State athletic director Gene Smith was never going to get his six-team, 10-week consolation Big Ten season because Whitmer would’ve never gone over her villian friend’s head and approved the Wolverines playing in her state. Villains are going to villain. Warren and Whitmer must’ve been evil laughing amongst themselves on conference calls at the thought of Gene frantically trying to save some sort of season.

It didn’t matter one bit that a University of Michigan cardiologist and his cardiologist friend over in London said the conference was promoting flawed data as cover for canceling the season. The Whitmer/Warren 2020 ticket had the Big Ten fall football season locked down and nothing was going to stop these two from loosening the grip.

Now Iowa’s cutting four sports. Even Ohio State is calling for $58 million in budget cuts to its athletic department. Back in June, Michigan was facing a $61 million decline in revenue. Wolverines fans received an email in early August asking them what they wanted to do with money paid for season tickets. Donating that money to the school was an option. That’s where we’re at right now in the Big Ten. Not only are fans losing the one thing in life they live for, but then they’re asked if they would be willing to just give that ticket money to the school for nothing in return.

It’s ugly out there for everyday people and yet Governor Whitmer is using “glad” to describe her reaction to the Big Ten being closed for business. 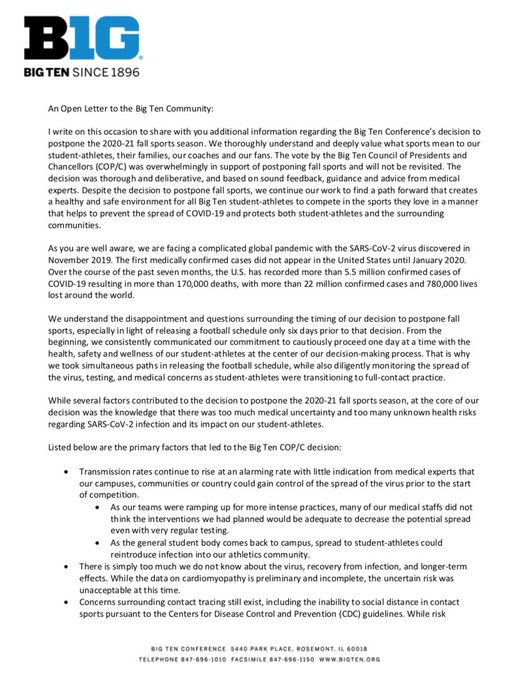 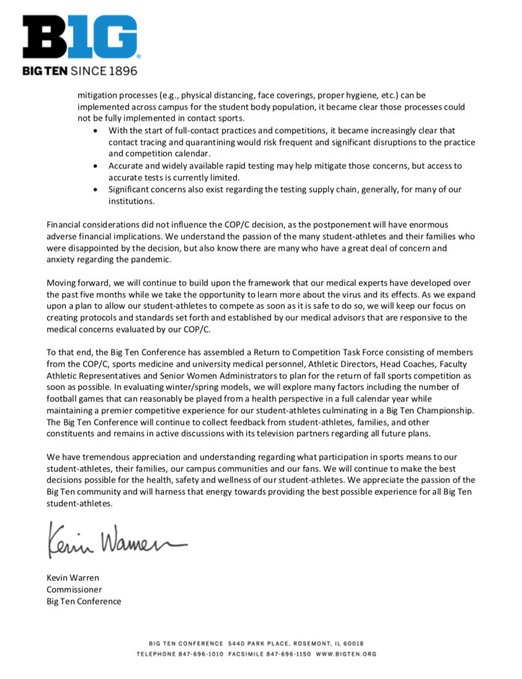