Now that the Big Ten is finally, unanimously announcing a return to play today, the question becomes if the Pac-12 will follow suit. Remember, the Pac-12 used the Big Ten as their lead blocker in cancelling the season, as the two conferences moved in lock-step, and now we’ll have to see if the Pac-12 follows the Big Ten again.

On the positive side of the spectrum, Pac-12 commissioner Larry Scott was before the Big Ten in announcing a groundbreaking rapid testing program that could accelerate the return of sports. Earlier this week, USC players petitioned California governor Gavin Newsom to #LetUsPlay.

On the other hand, the Pac-12 region is not nearly as passionate about football as Big Ten country. Most of the Pac-12 states aren’t playing high school football this Fall.

There’s not a school like Ohio State that has the combination of historical pedigree, modern championship contention, fan base, university leadership, and state government backing to make credible threats.

Fires are ravaging up and down the west coast and some of their outdoor stadiums are borderline unplayable right now. We’re seeing those dilemmas with the MLB and NFL as we speak — Mariners-Giants was postponed on Tuesday due to poor air quality.

The Pac-12 returning in lockstep with the Big Ten could happen, but it’s far from a sure bet. 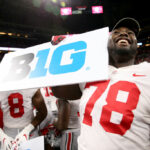 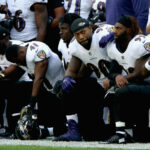