A sizable majority of Americans believe that transgender athletes should not be allowed to compete against biological females in athletic competitions, and even more, say that such athletes have a significant advantage over other competitors.

According to a poll conducted by the Washington Post and the University of Maryland, 58% of respondents do not believe that transgender athletes should be able to participate in women’s college or professional competitions, and 55% say they shouldn’t be able to participate at the high school level. Only 28% and 30% approve respectively 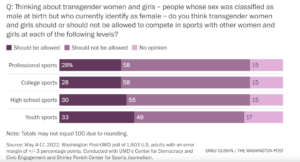 Though some transgender athletes have undergone surgery and taken cross-sex hormones for some time, they still went through puberty as a male. As a result, they have “greater muscle mass… bone density and testosterone levels, which can help boost athletic performance,” according to the Washington Post.

Because of these considerable physiological advantages, seventeen states have already banned transgender athletes from competing in women’s sports. Louisiana became the latest state to ban the practice when the Republican-led legislature passed a law banning it, which the Democrat governor refused to sign or veto.

According to a recent Pew Research Poll, just .6% of the population identifies as transgender. However, transgender athletes have made headlines in many women’s sports lately, including swimming, cycling, cheerleading, and skateboarding.