Back in 2000, a truly glorious year, Afroman blessed us all with a catchy tune that applies to too many people and too many situations these days: “But Then I Got High.”

Though the verses paint an apt picture of pothead life, it’s the chorus that really makes this one Afroman hit a wonder:

This song must really speak to legendary boxer Mike Tyson, who appeared on Jimmy Kimmel Live show and discussed a recent run-in with a fellow air traveler that turned violent. Though Afroman iterates all the things he wants to do but doesn’t because of his inebriated state, Tyson says Mary Jane prompted him to action.

“I was wrong. I shouldn’t have done that, but I was irritated, tired, high, pissed off, yeah. S*** happens.”

Let’s review the incident. According to OutKick’s Nick Geddes, a man named Melvin Townsend III “came up to Tyson on the plane and asked to take a selfie with him. Tyson obliged, but the fan’s overly excited friend couldn’t help but try and have conversation with the 55-year-old, who just wanted to chill on his flight to Florida. And that’s when Tyson’s demeanor changed, and he began throwing punches. 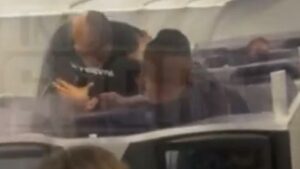 “By the end of the incident, the fan looked like most of Tyson’s opponents before Buster Douglas: bruised and bloody.”

Though most people, including OutKick’s own Sam Amico, gave Tyson credit for restraining himself in the situation for as long as he did, Tyson is sorry that he got so out of hand.

“I don’t want to hurt nobody,” Tyson sang to Kimmel.

Speaking of singing, let’s return to Afroman, who probably sympathizes with Tyson’s shoulda/coulda/woulda.

“I was gonna go to work but then I got high
I just got a new promotion but I got high
Now I’m selling dope and I know why:

There’s a lot of wisdom to glean from these sophomoric lyrics and simple rhyme scheme. Let’s hope Tyson learns his lesson. But even if he doesn’t, we can at least enjoy this trip down memory lane: