On the internet, March Madness isn’t about college basketball, it’s about creating alternative brackets that come with a few hours of internet fame and kick-back links. Some good ones have surfaced since Sunday, though none equate to the stakes of Ruthless‘ second annual Liberal Hack Tournament bracket.

I recommend filling out slowly. Upsets are imminent. 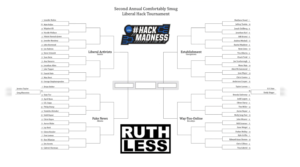 In the Fake News region, it’s hard to bet against the favorite, last year’s overall winner, Brian Stelter. Make no mistake about it, he faces tough competition. Though his resume could soon be a downloadable PDF in the description of a liberal hack, he is also up against Joy Reid.

While one could claim Reid failing to understand how many electoral college voters there are and what led to the Bush-Gore controversy is enough to clinch the region — that was only her early-season run. To ensure not even Brian Stelter without pants could close the gap, Joy Reid rallied up the loons to announce that conservatives are looking to buy the use of the n-word and that red states are only opening up so that black people can cook white people steaks.

I leave you with that.

Give me Aaron Rupar in the Way-Too-Online section. Rupar is awful. That’s it, that’s the case. I mean, look at the guy’s Twitter. When’s the last time he went outside? 2015, pre-Trump?

Rachel Maddow is winning the Establishment region. She’s more influential than anyone on this list, with oftentimes over 3 million viewers a night. As someone who covers news media, I have a grudging respect for Maddow’s ability to draw such a large, dedicated audience five nights a week. Then I hear her mention Russia, Russia, and Russia again and then conclude she’s the nutty liberal arts professor who brags about never administering a test that didn’t require a curve. Pretty good liberal hack, if you ask me.

I’m torn on Liberal Activists. Jennifer Rubin is a solid pick, Jake Tapper is as dishonest as ESPN claiming it picks the best candidate for a job — but how do I not take George Stephanopoulos?

When a No. 15 is this good (awful), you go with it. Worst of all, Stephanopoulos denies his biases more than any other character listed. Stephanopoulos leveraged his career with the Clinton administration into millions of dollars a year at ABC. While he has many roles at the network, the purposes are all the same. For an example, check out Stephanopoulos’ town hall with then-candidate Joe Biden. Yep, harder questions existed in Coca-Cola’s anti-white training.

Though he isn’t relevant in any conversation, it’s hard to pick liberal hacks without factoring in Keith Olbermann. Oh well.

Fill out your brackets and submit them in the comment section below: