One could spend a column just breaking down Brian Stelter’s weekly dishonest spin-jobs on his show, Reliable Sources. Of course, most media writers are not allowed to do that to CNN, and others, like me, are onto bigger stories.

On Sunday, however, Stelter pulled back the curtain to show viewers what it looks like when he does TV hits from home …. in his underwear.

Yes, you read that correctly — thus, turn away now, if needed: 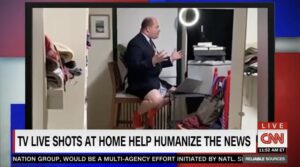 why would Stelter air this clip of him doing a live shot without pants on his own show? pic.twitter.com/uiR9Y65aMm

You often see Twitter users jokingly ask if an at-home host is wearing jeans with a suit or any pants at all; I can assure you that those questions will no longer be asked or even wondered.

Need a better look at his socks? Fine, I am here to help:

Life is about learning. Now you know — when Stelter is on TV, turn the channel. You just never know when the cameraman will catch the wrong angle.

UPDATE: Stelter says they are shorts, not underwear. Who is to say?

Poor Hannity, "traumatized" by the sight of me wearing shorts during a breaking news live shot from home. For the rest of you, check out my entire report about pandemic-era TV news from home: https://t.co/hd7eNXSouE pic.twitter.com/h637J0zQQN