Each Thursday, Outkick will update you on the latest polls for the 2020 Presidential election between Donald Trump and Joe Biden.

Here are the most recent polls from Real Clear Politics: 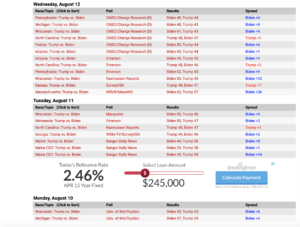 This week, Biden made his VP pick. As expected, he chose Sen. Kamala Harris of California.

“You can pick George Washington to be your vice president,” Trump told Outkick. “Let’s pick up Abraham Lincoln coming back from the dead. [People] just don’t seem to vote for the VP.”

However, thus far, the pick has been met with mixed reviews. Harris ran for president last year and was quickly rejected with a lack of support. So much so, she had to drop out before her home state, California, even had a chance to vote. Other concerns include Biden — with his significant lead in the polls —selecting a radical candidate, who has repeatedly criticized him.

Next week’s Outkick Pollwatch will be telling. The 2020 Democratic National Convention begins Monday.