Oh no. Not Olbermann.

Soon-to-be former CNN+ host Chris Wallace is the internal favorite to replace the fired Chris Cuomo in primetime on the CNN linear network. Yet The Wrap warns that Wallace may have a rival.

According to two individuals with knowledge, top CNN officials recently met with Keith Olbermann about a role.

Forget Brian Williams. He and his rather checkered past aren’t the story here. The story is that CNN actually took a meeting with Crazy Keith.

CNN insiders have said that under new management, led by Discovery and Chris Licht, the network would move away from a tainted liberal bias to restore its credibility as a news organization. Obviously, that’s not true if any top official even gave Olbermann the time of day at a New York brunch.

No one in the press taints credible news reporting like Olbermann. Even the thought of hiring him goes too far.

However, Olbermann’s Twitter activity leads us to believe that, in his mind, there’s still a chance CNN hires him. On Thursday, Olbermann randomly defended CNN following the news that it will shut down CNN+, just three weeks after its launch.

I understand it's not easy for you to understand things like this, but CNN and CNN+ are two different things. Ask an adult.

Olbermann would not have tweeted that if CNN had given him a definitive no, as it should have. Look at how Crazy Keith handled rejection from MSNBC:

A thread about returning to MSNBC.

A) I'm not
B) Yes, there were talks
C) Yes, they were serious
D) Yes, NBC lied through its teeth denying them
E) Yes, NBC blamed the talks' failure on @Maddow
F) I left in Jan. 2011. Comcast first reached out about my returning in…Sep. 2011🤷

So we have to assume CNN has not yet told Olbermann yes or no.

CNN must be under the impression that Olbermann, a caricature of a deranged liberal, would pull a better rating in primetime than any internal options, like Wallace and Laura Coates. CNN needs ratings, after all.

Still, Licht would have to sink pretty low to hire Olbermann. He’s the hideous face of the vile left.

The sad state of Olbermann is how it ends for the woke. Over the past year, Olbermann broadcasted a low-rated YouTube show using his iPhone on his balcony. On the program, the nutjob blamed Dave Portnoy and Barstool for a school shooting in Michigan, said the U.S. should restrict Texans from vaccine access, called for Tucker Carlson’s arrest, and spread misinformation about Ashli Babbitt.

Ultimately, Olbermann canceled his own show.

The only thing Olbermann has going for him is that he ran away with — and we mean dominated — the OutKick Woke All-Star challenge. Here’s how it went down:

**A live look at Olbermann celebrating the win.** 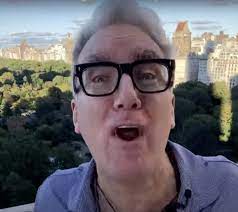 How does he look?

Don’t do it, CNN. Anyone but Olbermann.