Keith Olbermann, an angry tweeter, declared that Texans don’t deserve access to coronavirus vaccines anymore because Texas “decided to join the side of the virus.” By deciding to “join the virus,” the radical former TV anchor is referring to Texas lifting its mask mandate and reopening 100%.

Here’s Olbermann’s tweet for those of you he has blocked:

Why are we wasting vaccinations on Texas if Texas has decided to join the side of the virus? https://t.co/Yn2i7zT8KL

Yes, this is the same Olbermann who has been creating videos online — putting on a full suit for each two-minute clip — about Republicans endangering the country.

I got to say, I didn’t think KO would be able to top his recent Twitter meltdowns, which include calling Donald Trump “a whiny little Kunta Kinte,” for Tucker Carlson to be arrested, and for now-Supreme Court Justice Amy Coney Barrett to be “prosecuted” and “removed from society.” Yet he did that.

So, when is ESPN rehiring him? This summer? 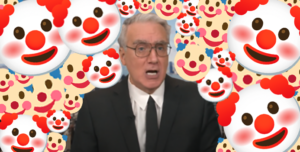