Thursday night, Olbermann got mad. Again. This time, he called for Fox News’ Tucker Carlson to be arrested. For some reason, Olbermann deleted the tweet before it really went viral. Luckily, the Daily Caller screenshotted it before KO’s swift removal: 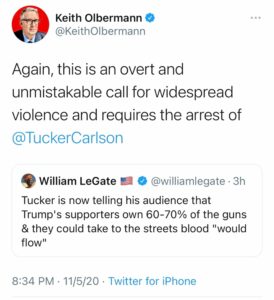 There’s no word yet if our legal system will listen to The Worst Person in the World with Keith Olbermann host and come to Carlson’s home and arrest him.

The fate of an Olbermann tweet is always precarious. On election day, he quickly got rid of his tweet calling President Donald Trump a “whiny little Kunta Kinte.”

Some wild Olbermann tweets do remain, however, such as his call for Trump’s arrest:

It is necessary to remove, and arrest, the president of the United States. Tonight.

A lot of people need to be arrested, huh?

Who could forget The Worst Person in the World with Keith Olbermann host’s demand for the conviction of Amy Coney Barrett? And, of course, her subsequent removal from society:

“He, and his enablers, and his supporters, and his collaborators, and the Mike Lees and the William Barrs … and the Mike Pences, and the Rudy Giulianis and the Kyle Rittenhouses and the Amy Coney Barretts must be prosecuted and convicted and removed from our society while we try to rebuild it and to rebuild the world Trump has destroyed by turning it over to a virus,” Olbermann explained.

We leave you with this:

Just logged back in: I apologize for my previous subtweet of this. I was using an old 70's-80's technique for calling somebody a c*** without writing/saying c***, just using a sound-alike to call Trump a c***

Deleting previous, largely because this one clarifies the c*** part https://t.co/hIIrt1Ke17