The Democratic party and media work hand and hand to establish a “boogeyman” for every sweltering cultural issue, a central character to personify their vilification of the counterargument.

Since Donald Trump left office in 2021, he has shared billing as the lead villain with Joe Rogan, Gov. Ron DeSantis, and most recently, Elon Musk. This week, Justice Clarence Thomas is the scary figure in the news.

The usual suspects have long targeted Thomas, but the Supreme Court’s decision to overturn Roe v. Wade and Thomas’ subsequent concurring opinion analyzing Obergefell, Griswold, and Lawrence — which affirmed, respectively, gay marriage, contraceptives, and same-sex sexual activity — have exacerbated their distaste for him.

The representation of Thomas’s concurrence suggests that his motivations are insidious. But as Jason L. Riley explains in the Wall Street Journal, Thomas is merely interpreting the due-process jurisprudence of the rulings.

Unfortunately, there is no time to discuss Thomas with an open mind when he’s the subject of a vicious witch hunt.

On this special occasion, the politically correct do not consider it racist to single out and lambaste a black man — so long as it’s Thomas.

The supposed anti-racists have been silent on the flood of racial slurs online directed at Thomas. Instead, they have shared a tweet in which Samuel L. Jackson refers to Thomas as “Uncle Clarence,” a nod to the slur Joy Reid coined in 2020, a play on the racist epithet “Uncle Tom.”

Former presidential candidate Hillary Clinton called Thomas “a person of grievance, resentment, and anger.” It sure is a good thing Clinton and her team cannot be guilty of racial undertones, huh?

Then there’s Lori Lightfoot, the nasty mayor of Chicago. Here’s Lightfoot shouting into a crowd of extremists:

Harkening back to a previous column, the Left is at a disadvantage when its side of the argument is at the center of the conversation. For example, explaining why abortion must be legal anywhere at any time is a complicated case to make. So is explaining where in the constitution there’s an invisible line under which abortion is covered.

Those are losing propositions. Therefore, the only winning move is to shift the conversation in a direction in which they can distract and properly disparage the opposing argument, furthering the never-ending loop of hysteria.

See, it’s more effective to portray Thomas as the poster boy for the guns have more rights than women movement than to deconstruct a ruling to undo the federalization of abortion laws. This same approach was used earlier this year by calling DeSantis “anti-gay” to deflect answering why gender fluidity ought to be in the kindergarten through third-grade curriculum.

These distractions instill fear. When people are afraid, afraid of someone in power, they are easier to manipulate. COVID-19 reaffirmed this to a great degree.

The New York Times used this tactic over the weekend in an op-ed titled “The Radical Reign of Clarence Thomas” to incite rage and anxiety. The piece claims Thomas is the green monster chasing the kids in the dark.

Articles and commentaries like that have proven effective. Fear attracts participants who would be otherwise indifferent to the cause.

Over the weekend, confused and scared extremists filled the streets in response to the portrayal of Thomas and the Supreme Court decision.

Fear-mongering has consequences. Take a look:

Mia went there so you don't have to. Click on her profile to see The Good (only one actually), The Bad (lots!), and the Ugly (lots and lots). https://t.co/DoC6t5UOr3 pic.twitter.com/n7HX2bIF32

To understand the re-discovered obsession with Thomas, know that the Los Angeles Times actually published an article called “Is Clarence Thomas a nice guy? Would you want to be his friend?”

The piece insists that Justice Sonia Sotomayor was out of line to call Thomas a beloved figure in SCOTUS. The writer of the article, unlike Sotomayor, does not know Thomas, yet he’s seen enough tweets and segments on MSNBC to determine that Thomas would not be a “good friend,” whatever that has to do with being a justice.

The plan is to produce distress by depicting Thomas as a lurking animal coming for the bodies of women. Thomas is described as the threat emerging beyond the chambers of the Supreme Court. 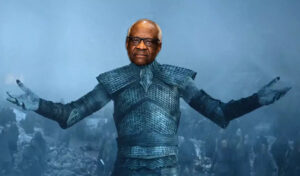 To make this point, critics of Thomas are selectively choosing cases more extreme than the norm as tools to sully his name.

On Friday, the LA Times also published the irresponsible conclusion that the justices signed a “death sentence” for black women. The piece, of course, did not note that staunch pro-life governors like Kristi Noem (R-South Dakota) have stated they favor an exemption for women whose lives are at risk.

Facts like that are inconvenient because the idea of the piece was to paint Thomas and the conservative justices as vile threats to women’s lives.

So, are you on the side of this menacing creature known as Clarence Thomas or the side of the endangered women? That’s how the press and Democrat politicians would like you to judge this divide. Call it manipulation of the conversation.

The college campuses have spoken. Though they failed, a student body this week called for George Washington University to remove Thomas as an adjunct professor for having a differing opinion than the one Instagram influencers share.

It’s the same tricks over and over again: hit pieces, calls for removal, gross exaggerations of the truth, and justification for nasty attacks.

Progressives cannot go into battle without creating an antagonist, whether it’s COVID, a Florida bill, social media misinformation, or nationwide abortions. And Thomas is the subject of the latter.

The Left chose Thomas for this role because it wants to destroy him. He’s a disruptor, a living contradiction to what they preach. He’s proof that the traditional beliefs he protects do not harm black Americans. Thomas also normalizes often ostracized worldviews.

Thomas is a threat to the Democratic party and media, and thus this group’s efforts to convince us that he’s the latest grave danger to humanity.

Fear is contagious. There’s an allure to participating in a takedown of a living monster, as they have made Thomas out to be.

At this moment, the boogeyman is Justice Clarence Thomas.