Elon Musk is the boogeyman. Haven’t you heard? Please, don’t even say his name aloud.

Last week, Musk offered to buy Twitter for the premium price of $43 billion, ostensibly in an effort to reinstate free speech on the internet. And the progressive Left hates him for it.

Politicians, journalists, and college professors have declared Musk the greatest threat to democracy since Donald Trump. One guy likened Musk’s quest for open conversation to the rise of Hitler in Nazi Germany, while Saturday Night Live openly suggested that Musk only wants free speech so that white guys can use the n-word. Whatever that means.

Why are they so worried about Musk, an immigrant from South Africa who likes to smoke weed and make sexually explicit jokes? Musk can single-handedly change the future of online interaction. So to the purveyors of groupthink, Musk is dangerous.

Right now, Twitter is not a place where curious people of goodwill go to engage in open discourse. It’s a social media schoolyard where self-important hall monitors prevent people from thinking for themselves. Constantly redirecting upstart free thinkers back to the acceptable narrative is tough work, and the power dynamic is delicate.

Now Musk threatens to ruin it all.

“Twitter has become kind of the de facto town square, so it’s really important that people have both the reality and the perception that they’re able to speak freely…so there’s no sort of behind-the-scenes manipulation, either algorithmically or manually,” Musk said Thursday at “TED2022: A New Era.”

The establishment cannot lose control of Twitter to Musk or to anyone else who would pay fealty to the First Amendment. Twitter is too important. It’s the arbiter of what is right and wrong, racist and not racist, factual and “misleading.” The app recently managed to crowd out dissenting voices and reach a kind of censorship utopia where blue-check influencers can normalize any viewpoint and punish any thoughtcrime, including the belief that gender is biologically determined and not a costume that you can wear as you chose.

So Musk is more of a threat to the woke movement than any US president has ever been, even Donald Trump. Trump may have brought awareness to the suppression of free thought in the digital space and in the press, but Musk has the ambition and the resources to destroy the gatekeepers who have held free thought hostage. 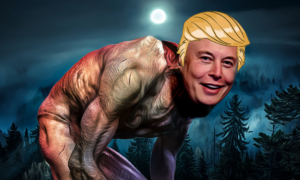 If Musk can access the algorithms that control Twitter, he can expose what makes Twitter such a critical tool to the Left. To wit, it frightens everyone else into silence.

Twitter has convinced those who resist the one true opinion that they are bigots in a fringe minority. Of course, that’s not the case. What has happened is that 3 percent of the population creates 90 percent of all tweets. This 3 percent is loud, vicious, and among the most liberal people in the entire country. Most Twitter users are scared of them, and thus have self-censored themselves. A 2020 survey found that 62 percent of Americans are “afraid” to post their honest views online.

Because most Twitter users are scared to contradict the narrative, the app no longer has to work so hard to keep dissenting voices quiet. For instance, Twitter didn’t have to silence over half of its users who believe that COVID restrictions are draconian, that we weren’t all born racist, and that only perverts talk to six-year-olds about sex changes. The threat of online character assassination or losing access to their account kept the rabble-rousers contained.

Now, Musk is trying to give the silent majority their voices back.

And Twitter mobsters aren’t sure how to neutralize Musk. Their usual threats and labels don’t work on him. If there has ever been a truly uncancellable person, Elon Musk is it. He doesn’t have a boss and doesn’t rely on advertisers for a podcast. He owns multiple major corporations and is worth $264.6 billion, the effest of eff you money on the planet.

Musk is not like other billionaires such as Jeff Bezos and Mark Zuckerberg. He is completely independent. Politicians can’t control Musk through protective provisions in Section 230 of the Communications Decency Act. He’s not interested in compromising with journalists in exchange for fawning profiles in the New Yorker.

With such rabid independence, how can a group intimidate someone like Musk? Who knows. Fortunately, his detractors have no idea how to intimidate him either. Secretly, they probably already know they can’t.

Members of the Twitter board will likely put the financial interests of shareholders to the side and reject Musk’s offer out of spite. Board member Saudi Prince Al-Waleed bin Talal has already said that he opposes Musk’s offer. A Saudi Prince can’t give up censorship in the US, no matter how much money Musk offers.

But that won’t actually solve the problem of the pro-censorship crowd. “Poison pills” won’t make Musk go away. Musk has never accepted rejection and says he already has a plan B.

And that’s what terrifies the thought police most.

If he doesn’t join Twitter, Musk can then haunt Twitter board members and trendsetters from the outside. He can buy an online newspaper or a cable news network and allow his reporters to dig into behind-the-scenes stories from Silicon Valley and Washington DC.

He could probably grab CNN at a bargain price these days.

Musk is a threat to every Democrat politician and member of corporate media who established themselves through Twitter. They’ve called for suppression, taken over major civic institutions, and subverted the truth. And now, the jig may be up.

Elon Musk is perhaps the only influencer on earth who doesn’t answer to the censors. And now, the censors fear they will soon have to answer to him.