New York Times best-selling author Jeff Pearlman is making a huge push for his inclusion in the 2023 OutKick Woke All-Star Challenge after what he pulled this week.

Pearlman, who wrote the “largely glowing” (Jeff’s words) Brett Favre biography “Gunslinger” in 2016 is now advising people to avoid purchasing his book because the Pro Football Hall of Famer is wrapped up in a $5 million welfare scam in Mississippi where it’s alleged money was funneled to build a volleyball arena at Southern Mississippi where his daughter played on the team. The working theory is that Favre was in charge of fundraising for the arena and worked with the state’s governor through backchannels to come up with the arena funds.

And because Pearlman is a huge snowflake, he has Favre guilty as charged before the guy has even been indicted.

“I wrote a biography of the man that was largely glowing,” Pearlman typed on Twitter this week while clutching his pearls. “Football heroics, overcoming obstacles, practical joker, etc. Yes, it included his grossness, addictions, treatment of women. But it was fairly positive.

“Looking at it now, if I’m being brutally honest — I’d advise people not to read it. He’s a bad guy. He doesn’t deserve the icon treatment. He doesn’t deserve acclaim. Image rehabilitation. Warm stories of grid glory. His treatment of @jennifersterger was … inexcusable.”

The Jenn Sterger line is a reference to inappropriate texts (dick pics) Favre is accused of sending to her back in 2010 when Sterger worked for the Jets and Favre was the team’s quarterback.

But let’s get back to Jeff and his plea to people to not buy his eight-year-old book.

And now—taking money that was designated to help poor people in HIS STATE, and funneling it to build (checks notes) A FUCKING VOLLEYBALL ARENA (!?!?!?) is so grotesque, so monstrous. I don't know how someone like that looks in the mirror. I just don't. [3] pic.twitter.com/8JhOJyFAJF

“And now—taking money that was designated to help poor people in HIS STATE, and funneling it to build (checks notes) A F–KING VOLLEYBALL ARENA (!?!?!?) is so grotesque, so monstrous,” he continued. “I don’t know how someone like that looks in the mirror. I just don’t.

“So, sincerely, don’t buy the book, don’t take it out from the library. Leave it. There are sooooo many better people worthy of your reading hours. Of your time. I prefer crumbs like Brett Favre shuffle off into the abyss, shamed by greed and selfishness.”

There you have it, Brett’s guilty.

Hold up, Jeff knew, in 2016, that Brett Favre had this Jenn Sterger (alleged) dick pic thing on his social resume and it takes an alleged welfare scam for Favre to cross the line with Pearlman?

I've never signed and shipped more books than Gunslinger. Not even close. The power of Favre and @packers #Gunslinger pic.twitter.com/qHNFqeJuIQ

So you didn’t have a problem making money on a Favre biography during the #metoo movement, but now it’s welfare money for a volleyball arena allegation that sends you over the top?

What a stunning and brave move for Jeff after all these years making money off the Favre book.

“Is this the best book I’ve written? I think so,” Pearlman writes about “Gunslinger” on his website.

And before you ask, yes, Jeff’s still promoting the book on his site and links to purchase it are still active.

So stunning. So brave. 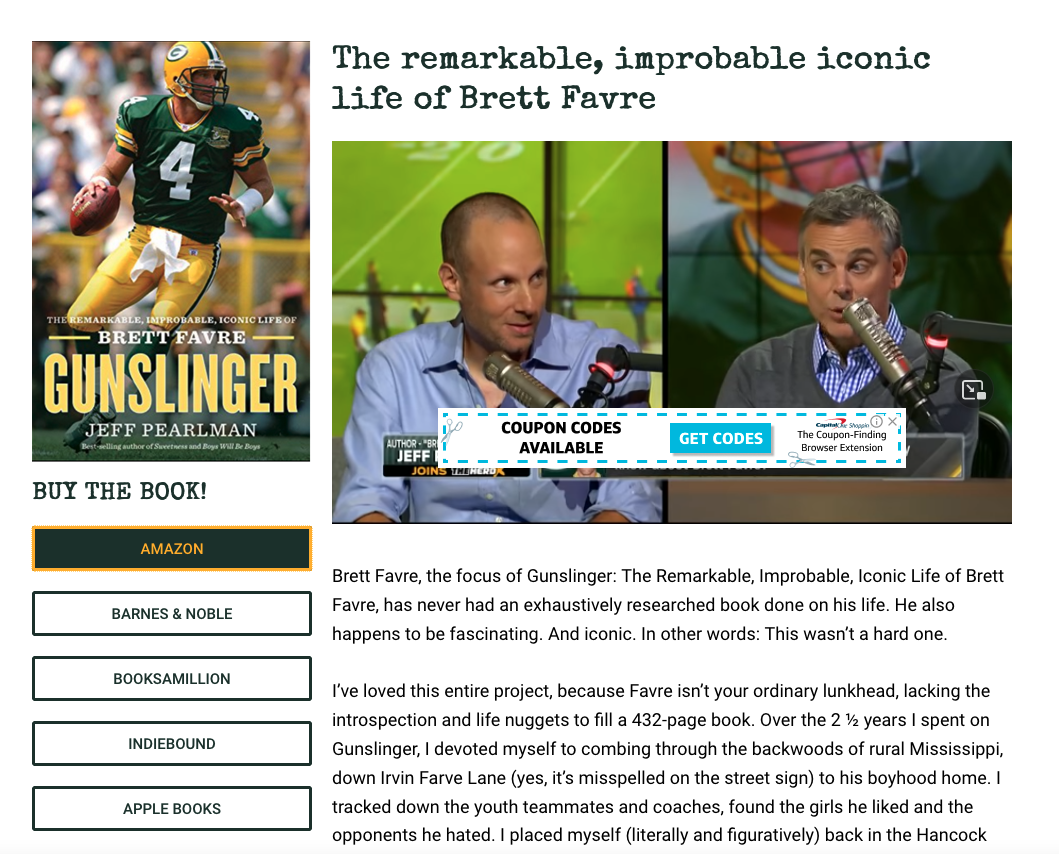 And we even get vintage Sarah Spain of ESPN fame in the comment section:

Good on you for saying that.