If you thought the drama with the Cleveland Browns would end once Odell Beckham Jr. was released and shipped out of town, you clearly haven’t been paying attention to drama king Baker Mayfield and his drama queen wife Emily Mayfield.

Nobody in Cleveland loves drama like these two, and Emily was up to her old ways Sunday when she shared a message on Instagram Story where a Browns fan made reference to Baker’s toughness and how “Maybe the rest of the team should take the hint and get tougher.”

The Mayfields are the first ones to make sure fans know Baker is playing injured and doing whatever it takes to barely beat teams like the Lions.

Yeah I've had enough of this pic.twitter.com/dr8ECs8NPd

Browns beat reporter Mary Kay Cabot noted how Baker stormed off the field after Sunday’s 13-10 victory over the winless Lions and had a “scowl on his face and didn’t bother to congratulate his teammates, acknowledge his opponents or celebrate with fans.”

Cabot added that Mayfield was booed by fans, which clearly seems to be a reaction to poor performance and the whole ‘I’m injured’ storyline. “The boos rained down again after he missed an open David Njoku vs. a safety blitz on third and 8 with 5:23 left and the Browns clinging to their three-point lead,” Cabot wrote. “With the way Mayfield has fought for this team and this city, getting booed must hurt to the core.”

I also love the guys on this team. I respect every single one of them. Make a story out of whatever you want; I’m NEVER hating on them. They put it out there every week, many have injuries no one ever hears about, and they’re all tough as hell! https://t.co/vo1oNAiYom

In 2020, Emily snapped on Browns fans when her then-injured husband was being attacked. “He’s not in an easy position. And he’s grinding for this city. It takes time. Don’t send me some stupid sh*t,” Emily Mayfield wrote at the time.

With a husband who is fighting for a massive long-term deal in Cleveland that seems to be slipping away, the husband and wife team seem to agree that when in doubt, tell fans to stop questioning the quarterback because he’s playing injured and giving it his all for this ungrateful city.

Here’s what Emily had to say back in October after a dog fight against the Chargers: 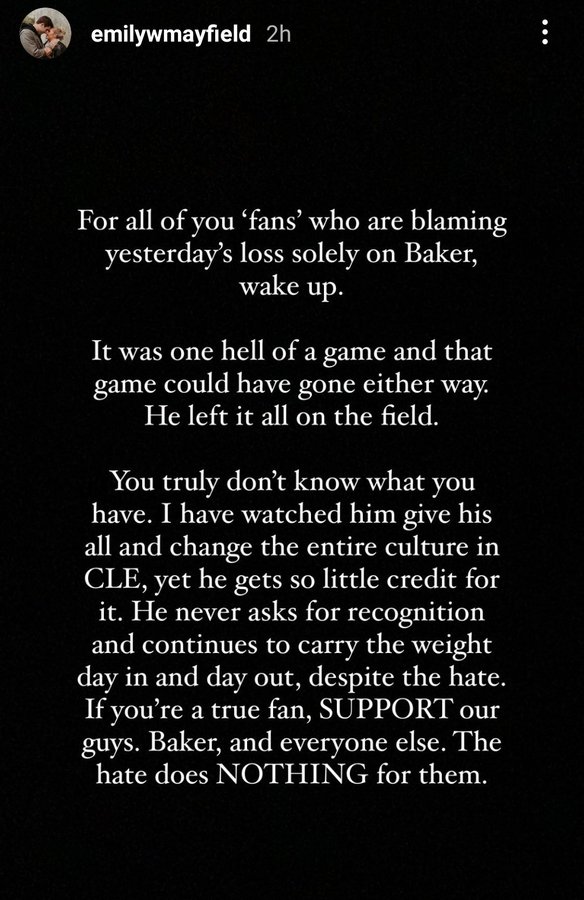 Sunday it was more of the same from the drama king and queen who just might be wearing out their welcome in a city that thought it had found its savior at quarterback.