If you listened to Cleveland sports talk radio Monday morning, you’d know that the locals, who thought they had a Super Bowl contender after a 4-1 start, are not at all happy with what they saw out of a banged-up Baker Mayfield Sunday against the Steelers. The Browns quarterback went 10 of 18 for 119 yards, a touchdown and two interceptions before being pulled in the third quarter to spare his ribs from further destruction at the hands of the Steelers defense.

Irrational Browns fans put the 38-7 beatdown squarely on the shoulders of Mayfield, and the pressure is starting to build on the former No. 1 draft pick who has a fifth-year option coming due this spring. Rational Browns fans recognized that the loss was an overall team failure against superior opposition.

After sitting through an hour and a half of callers on 92.3 The Fan in Cleveland, it wasn’t hard for me to tell that irrational Browns fans were winning. Then Baker’s wife, Emily Mayfield, confirmed it on Instagram Story. She’s just about had it with irrational Browns fan.

“He’s not in an easy position. And he’s grinding for this city. It takes time. Don’t send me some stupid sh*t,” Emily Mayfield wrote.

Emily, a transplant to the city, is dealing with fans who a year ago thought that their team was bound for the playoffs, only to endure a disappointing 6-10 season and another coaching change.

While the coaching job seems to have stabilized, Browns fans are becoming desperate to get over the Baltimore and Pittsburgh hump. The 4-2 Browns have beaten teams with a combined record of 8-15-1. The two losses have come in blowout fashion to their AFC North rivals.

Mrs. Mayfield clearly doesn’t understand how the brains of irrational Browns fans operate. These guys forever crush beers as they imagine their beloved Browns winning a Super Bowl. Then they crush 20 more beers and imagine the Browns as back-to-back Super Bowl champs.

She’s beginning to crack, and once the starting quarterback’s wife fully breaks, trouble will soon follow. As Emily Mayfield goes, so go the Browns. Mark my words. 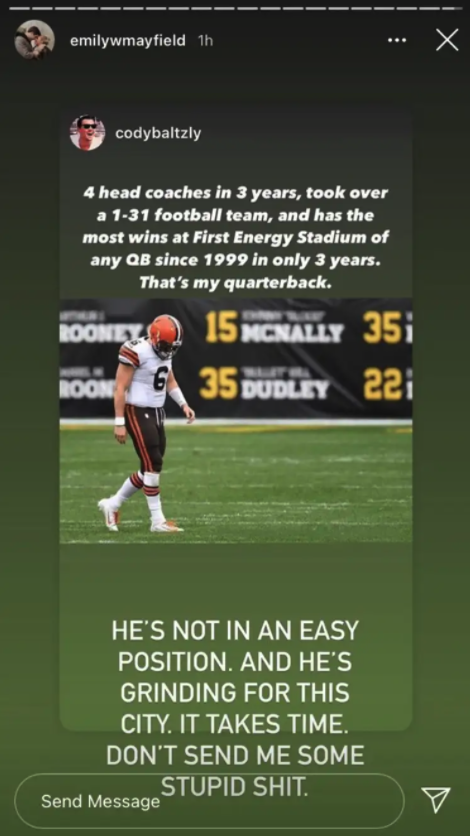