The sixth installment of Twitter Files revealed details about the social media service’s integrated relationship with the FBI.

Thursday, journalist Matt Taibbi released a series of tweets that proved the agency treated Twitter as a “subsidiary.” #TwitterFiles6 further affirms our July column that described Twitter as an agent of the government.

Specifically, Twitter Files 6 notes a “surprisingly high number” of the FBI’s requests asked the social media service to take action on what it considered “election misinformation.” This request included accounts that engaged in satire.

“The #TwitterFiles are revealing more every day about how the government collects, analyzes, and flags your social media content. Twitter’s contact with the FBI was constant and pervasive, as if it were a subsidiary,” Taibbi tweets.

“Between January 2020 and November 2022, there were over 150 emails between the FBI and former Twitter Trust and Safety chief Yoel Roth… a surprisingly high number are requests by the FBI for Twitter to take action on election misinformation, even involving joke tweets from low-follower accounts.” 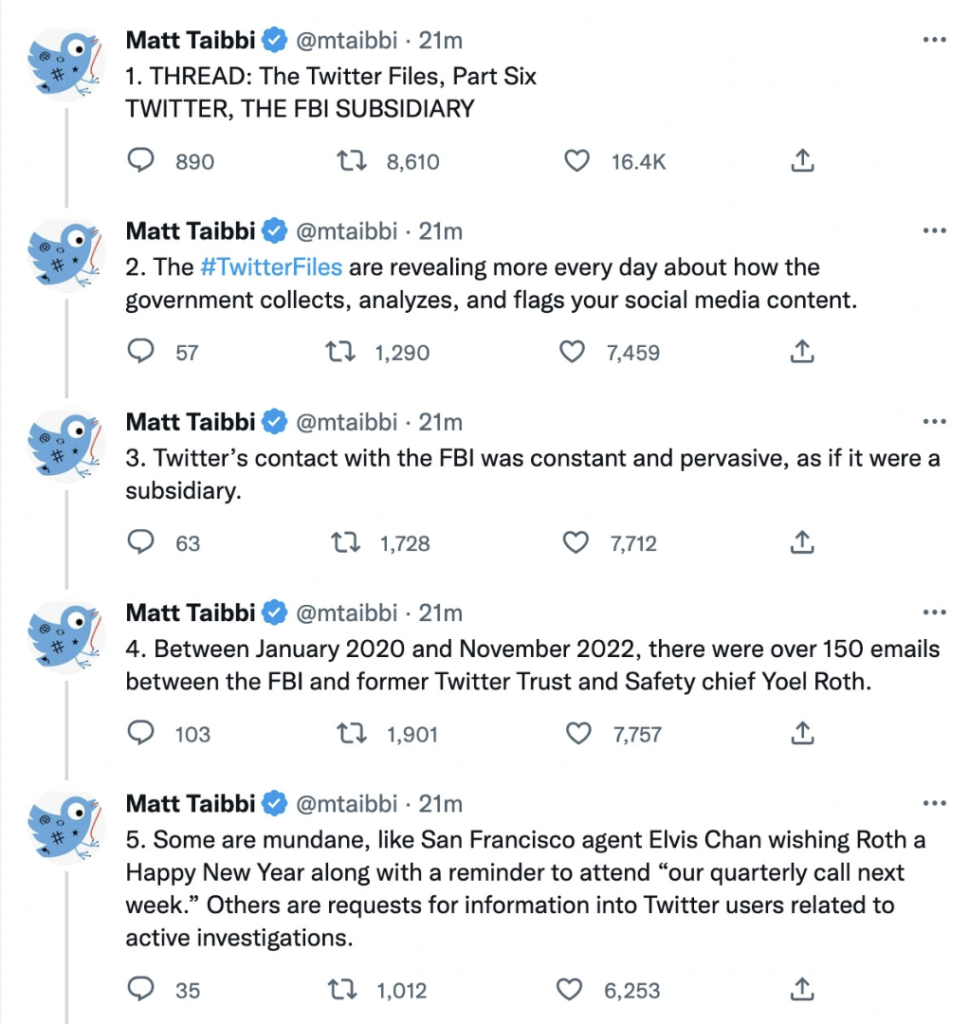 Put simply, the FBI infiltrated Twitter ahead of the 2020 presidential election. Another conspiracy turned reality. One of just many.

In July, Meta CEO Mark Zuckerberg told Joe Rogan that Facebook suppressed the distribution of the Hunter Biden laptop story in 2020 following an in-person visit from the FBI.

“Basically the background here is the FBI, I think basically came to us — some folks on our team and was like, ‘Hey, um, just so you know, like, you should be on high alert. There was the — we thought that there was a lot of Russian propaganda in the 2016 election. We have it on notice that basically there’s about to be some kind of dump of — that’s similar to that. So just be vigilant.’”

“We just kind of thought, Hey look, if the FBI, which, you know, I still view as a legitimate institution in this country, it’s a very professional law enforcement. They come to us and tell us that we need to be on guard about something. Then I wanna take that seriously,” Zuckerberg said on the “Joe Rogan Experience.”

The FBI interfered in the election by virtue of Facebook. And it strongarmed Twitter to limit the distribution of information it did not want public.

We await to learn how the FBI influenced Google in 2022.

Our column last week detailed how Elon Musk’s purchase of the platform dismantles the unconstitutional relationship between Twitter and the government. Ultimately, Twitter provided the government a workaround to the First Amendment.

“That describes a clear violation of the First Amendment. Defenders of censorship long refuted such claims with the rebuttal that Twitter is a private company, and thereby the First Amendment need not apply to its rulings. While previously correct, the relationship between Big Tech and Washington undermines this defense.

“The published communications prove Biden officials strong-armed a communication service into carrying out the authoritarian measures the First Amendment prohibits the government from exercising. Suppressing critics at the behest of the White House makes a private company a  “state actor,” whose targets can sue for restricting First Amendment rights.”

You can read the full column below:

Twitter Files through six installments has provided definitive proof that previous ownership engaged in politically-motivated censorship, colluded with the government, shadowbanned conservative accounts, and ruled on behalf of the FBI.

But at least the FBI didn’t ask Twitter to suspend left-wing accounts for doxing the location of a private jet.

That would have caused a threat to “the future of the free press” and “democracy,” says CNN’s Oliver Darcy and Digital Content Next CEO Jason Kint.

An FB representativeI tried to defend the agency in a response to Fox News Digital Friday:

“The FBI regularly engages with private sector entities to provide information specific to identified foreign malign influence actors’ subversive, undeclared, covert, or criminal activities. Private sector entities independently make decisions about what, if any, action they take on their platforms and for their customers after the FBI has notified them.”

Twitter 1.0 was, by definition, a private company. Yet such a description hardly does justice to a service that worked as an arm to the DNC, Biden administration, and the FBI — all of which Twitter Files have proven.