One of the biggest question marks in media is the succession plan for Tony Kornheiser on ESPN’s PTI.

A Twitter thread last week speculated about what ESPN will do when, and we don’t know when, Kornheiser eventually steps down. That got us thinking.

It’s not that Kornheiser is retiring or leaving tomorrow. He’s still one of the more entertaining voices on sports television. But he’s 74 years old and holds a coveted seat on the highest-rated show in sports.

In 2018, I interviewed Kornheiser’s PTI co-host Michael Wilbon about this topic. Wilbon, 63, said Kornheiser often jokes about retiring. Wilbon adds that while he’s unsure what the plans are at ESPN, he plans to continue PTI after Kornheiser leaves.

So who are the possible candidates?

Scott Van Pelt is the first name that comes to mind. SVP moved to DC, the home of PTI, a few years ago and is one of the biggest names at the network. His witty humor would fit right in with the format of the show.

There is, however, a question as to whether Van Pelt would want the job. He’s one of the few hosts who’d have a decision to make. Currently, he anchors the 12 am SportsCenter, a program that follows the biggest events on the network.

If not SVP, perhaps it’s Frank Isola. Known as “Fill-in Frank,” Isola is Kornheiser’s backup host and has chemistry with Wilbon. Chemistry defines PTI. Isola and Wilbon would be fun, an escape from ESPN’s more political programming.

One note: I would have predicted that Rachel Nichols would succeed Kornheiser before ESPN fired her after a nasty leak to help Maria Taylor get paid. Here’s a recap of that scandal.

Pablo Torre, a frequent guest-host, would likely receive consideration for the role. Though Torre failed on High Noon, it wasn’t his fault. How do we know? Because he co-hosted with Bomani Jones. Every show Jones has hosted, from radio to ESPN to HBO, has tanked hard in viewership.

Aside from Charles Barkley, no one in TV could offset the damage that is working next to Jones, the ultimate ratings poison.

There’s also a possibility that ESPN goes with a PTI rotation as it has with First Take. Wilbon may not want to work with someone else full-time — Stephen A. Smith didn’t (though he should want Chris “Mad Dog” Russo to be his new Skip Bayless.) 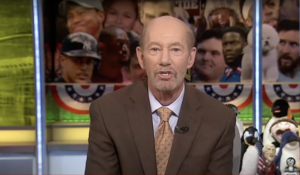 Of course, backstage politics and PR will play a role in the future of PTI. Showrunner Erik Rydholm is one of the wokest guys at ESPN. He doesn’t allow new white guys on Around the Horn and only considers panelists who have a resume of calling people racist.

Could SVP and Isola overcome the wokeness of Rydholm? Tough to say.

Rydholm has elevated some of the most unsuccessful voices at the network, like Sarah Spain. He programs for perception on Twitter.

So, when the time comes, don’t be surprised if he names Mina Kimes the new PTI co-host. That would sure draw applause on social media.

There’s no timeframe as to how long Kornheiser until he moves into full-time golfing. His role is cushy, after all. I’d guess he has at least three years left and as many as six. Who wants to work past 80?