As we’ve told you here at OutKick, HBO would renew  Race Theory with Bomani Jones not because it wanted to, or because anyone likes the show, but to avoid Jones and his media lackeys calling the network racist.

And that’s exactly what HBO did. On Tuesday, it announced that it would renew the show for a second season.

The decision to bring Jones back signals to each HBO host, actor and screenwriter that the service is no longer in the business of listening to its subscribers.

The first season of Race Theory drew the lowest ratings of any HBO original program on record. Though he follows top-rated John Oliver, Jones lost 80% of Oliver’s audience, drawing as low as 45,000 viewers.

Over the course of Jones’ six-episode run, he lost to a 2 am infomercial on CNBC three times. Snuggies must be popular with the night/morning crowd.

In the most telling development, the HBO PR team couldn’t find a single positive ratings takeaway from the first season to include in its embargoed press release to Deadline about renewing the show for a second season. 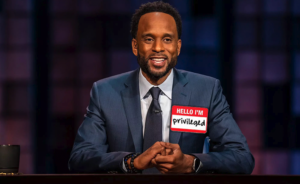 Networks pay PR reps to spin numbers favorably, no matter the results or how arbitrary the category is. Yet Race Theory performed so poorly that HBO couldn’t find one excuse to use the words “ratings,” “viewers,” “popularity,” “growth,” or “reaction” in its release. Good for Jones.

So HBO isn’t pretending that it renewed Jones for any reason other than to shield itself from hit pieces from the media.

By contrast, HBO had no such qualms about canceling far more popular host, such as Bill Simmons, whose similarly-formatted Any Given Wednesday program drew about 200,000 viewers a week — more than four times Jones’ average — in 2016.

That’s what Simmons gets for being a white guy whom media writers don’t like. It’s called privilege, folks.

Jones has proven that to make it in media, you need not be popular or successful, so long as you instill fear into your employers.

Of course, you have to have the right skin color and reputation as a race-baiting leaker to pull that off. But maybe you can one day, too, reach Jones’ heights even without an audience to justify the cost of your studio set.

Jones epitomizes the fall of the media. No one likes him. He has now drawn all-time lows for ESPN Radio, ESPN television and HBO — yet he continues to step over his more worthy counterparts on the account of his racial privilege.

HBO renewed Bomani Jones for a second season as means to show the press that under new management, called Warner Bros. Discovery, HBO enables people of color to call white people racist, the synopsis of Race Theory with Bomani Jones.