Everyone wants a tip: those who deserve one; and those who hand you a bag with one hand and grab at your wallet with the other.

Over the weekend, Daily Wire host Matt Walsh started a discussion on Twitter regarding the innovation of tipping. Walsh says he’s long been a gracious tipper but questions the new standard.

“[Tipping is] getting out of control now,” Walsh begins. “We need to have a national conversation about which jobs actually deserve tips.”

Tipping expectations understandably rose during the pandemic. Waitresses couldn’t earn tips for serving, so caring customers tipped them for takeout. But restaurants and bars are open. They’ve been open. Yet some local restaurants still include gratuity fees on the receipt for takeout.

You, too, can earn a few bucks for handing someone a bag through a window.

Credit card machines now ask how much we want to tip the person who handed us a coffee. Coffee shops set the default at 20%.

Similarly, various store cashiers say your total aloud, then point you to the screen below. That screen asks whether you want to leave a 15%, 20%, or custom tip.

Target gives us the option of 35%.

And the cashiers stare in your face to pressure you to avoid even pondering the “no tip option.” This is where not white privilege, but hot chick privilege looms large. (Especially if she’s hot with pigtails.)

Granted, these jobs are more important to the workflow of the country than mine. I would also save someone who pours coffee before a journalist or media personality. However, no one should expect a tip for handing someone a bag or drink. 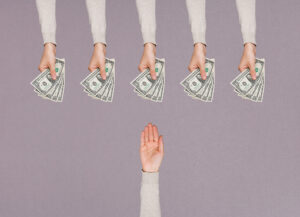 A general rule: if you spend less than a few minutes dealing with a worker, don’t tip. Tip them if they serve you. Waitresses clean up after you. Barbers cut your hair. The Uber Eats driver saves you from driving, I guess.

The idea is to tip those who provide a personal service. Thus, we tip taxi drivers but not pilots or bus drivers.

Before some woke comes at me to say I’m rude, know that wokes are traditionally poor tippers. At least that’s what I’d suspect.

Tips also used to mean someone did their job well. Knowing they could make extra for being polite and working faster encouraged them to perform at a higher level.

In an era of entitlement, workers expect a large tip no matter their performance. The waitress in the back on Tinder thinks she ought to get the same tip as her co-worker grinding, carrying four hot plates.

Now, we are supposed to tip an employee for not dropping the Subway order behind the plexiglass during handoff.

Tip your waitress, your barber, your pizza delivery guy, and the other workers you used to tip before the pandemic. And stop there.

At this rate, employees will expect a tip for pointing us to the correct aisle, whether it’s the right direction or not.