The Tennessee baseball team might be the hottest team in the country right now, but they will also be playing the next two games without their head coach Tony Vitello, who got a little heated himself and bumped the chest of an umpire during a game last weekend.

Now, he’s capitalizing on the moment. On Wednesday afternoon, Vitello was on campus raising money for Wounded Warriors by offering $2.00 chest bumps. 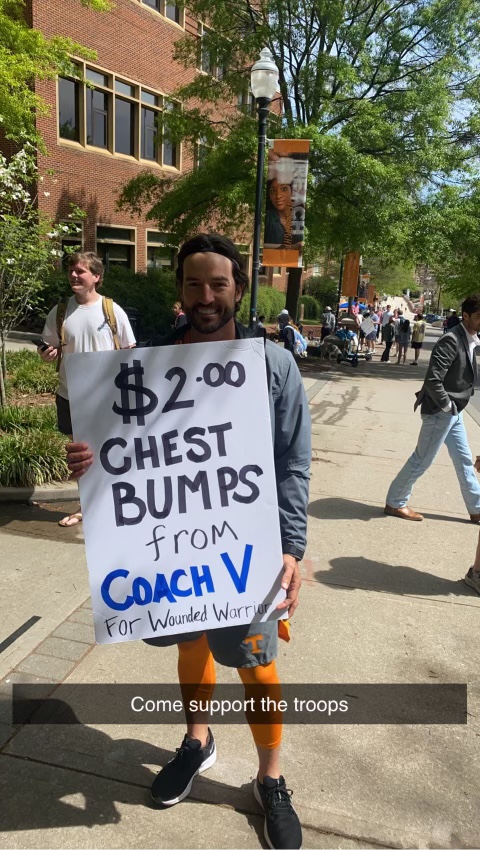 Here is the GoFundMe link that SAE is using to raise money for Wounded Warriors.

Coach Vitello even let me get a chest bump pic.twitter.com/baMvHD8W5m

The Vols baseball coach has done something like this in the past. In 2018, Vitello was suspended due to an ejection and had to miss a game against Vanderbilt. So he decided to host a pizza and lemonade party near the stadium to raise money for National Court Appointed Special Advocate Association, or CASA.

Tennessee football coach Josh Heupel got in on the action today as well, throwing footballs at the dunk tank, helping raise money in the process.

It was a hit. Tennessee fans came out in droves to take part in the event. It was one of those moments that captured the hearts of Vols fans all over.

Safe to say Tony Vitello has used his little bit of downtime for all the right reasons.

Though he has once again endeared himself to Vols fans, Vitello still will not be allowed back into the dugout for live action until Sunday’s game against Florida in Gainesville. He has to finish out his suspension for the free chest bump he gave the ump.