The latest FanDuel SportsBook Super Bowl odds are as follows: 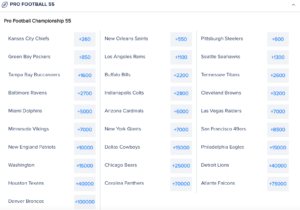 At +850, the Packers jump out. When they’re at their best, there isn’t a more explosive team in the NFL. Everyone likes to point to Patrick Mahomes and the Chiefs, but Aaron Rodgers and the Packers have been better. Green Bay scores more points per game than Kansas City, and Rodgers throws more touchdowns and completes a higher percentage of his passes than Mahomes. Davante Adams is also a better receiver than Tyreek Hill.

Among the contenders, Green Bay also has the easiest route to a first-round bye. The Packers probably don’t have another loss on the schedule. While the Saints have a better record, they would then need to win out as Green Bay holds the head-to-head tiebreaker against them. The Saints’ remaining schedule is not easy, including a meeting with the Chiefs in a few weeks.

The last time Aaron Rodgers had a team this strong, he won the Super Bowl.

In the AFC, the first seed is a 50-50 race between the Steelers and Chiefs. With a better record, Pittsburgh is the favorite.

At +2600, the Titans are intriguing. Derrick Henry is more of a threat to opposing QBs than any opposing defense. He keeps them waiting and watching while he runs over, through, and past their teammates. Above all, the teams ahead of the Titans in the odds — Kansas City, Green Bay, Buffalo — struggle to defend the run. They hope Henry is eliminated quickly.

Super Bowls are often won in December, when teams get hot. See last year when Kansas City’s defense came alive while the attention was on the Ravens, Patriots, and 49ers. For value, consider Baltimore down the chart in the fourth row.

Like Mahomes at this time a year ago, Lamar Jackson is a year removed from a league-altering MVP run and struggling to regain the magic. The Ravens have as strong of a roster as the NFL’s best. The defense and run game are there. Jackson just needs to deliver. At +2700, it’s worth a look.

Stay away from the top row teams. While all three are capable of winning a Super Bowl, they are not much better than the second row teams with more rewarding odds.

Bet now at FanDuel via OutKick.