Stephen A. Smith wants you to think MLB is dying a slow death while the NBA is surging.

On Wednesday’s First Take, Smith and Chris Russo debated whether MLB was on the verge of irrelevance amid its ongoing lockout.

Smith cites recent World Series ratings as proof that Americans have lost interest in baseball. Let’s look at that:

This past season, the Braves-Astros World Series averaged 11.8 million viewers. Smith thinks that’s alarming. If so, and maybe it is, what does he say about the 2021 NBA Finals, which averaged only 9.9 million viewers?

If you are looking for an answer — stop. First Take has not covered NBA ratings since 2017, around the time viewership began to fall.

Smith calls the MLB’s declining ratings a trend. That’s also inaccurate. World Series viewership increased from 2020 to 2021. And 2020 was a record-low because of the pandemic (as it was for NBA Finals). And yet the World Series outdrew the Finals in 2020 as well, 9.8 million to 7.5 million.

As for revenue, to use Smith’s other argument, MLB tops the NBA there too. According to Forbes, MLB generates $10 billion, ahead of the NBA’s $8 billion.

So why is Smith declaring MLB on life support while cheerleading for the NBA every day on his show? Why won’t ESPN discuss NBA’s issues, which include stars skipping games, dire ratings declines, uncompetitive playoff series, and a meaningless regular season?

“Let’s talk about why the media covers the NBA like it does. This is behind the curtains, behind the wall of sports media: the NBA is over-indexed because big media companies own their rights.

“The amount of NBA coverage you get is not reflective of the demand out there. This shows in the ratings. People don’t care about the NBA like pop culture and the media want you to believe. On the opposite end of that spectrum is baseball, which generates zero discussion.”

“Here’s why I think that is: baseball is hugely popular among the local markets but doesn’t have the national appeal.

The NBA may have more national cachet than MLB, but it’s not the healthier league, as Smith wants you to believe. Those local markets, as Clay discusses, are cash cows.

In 2019, Ryan Glasspiegel compiled a chart comparing the MLB vs. NBA RSN ratings in the country’s seven biggest TV markets. Take a look: 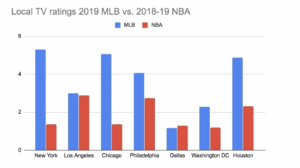 MLB is not without flaws. The league will miss games to start the season and that’s an indictment on leadership. However, it’s telling that ESPN and Stephen A. Smith will openly promote segments derailing MLB, as they did for years with the NFL, but ignore much bigger problems in the NBA.

ESPN in general and Stephen A. in particular are untrustworthy and in the pockets of the NBA.