Each week, Outkick updates you on the latest polls for the 2020 Presidential election between Donald Trump and Joe Biden. 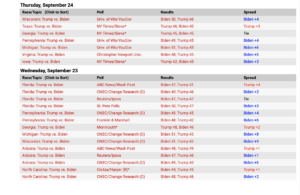 All eyes are on the new ABC News/The Washington Post polls, which have President Donald Trump leading in both Florida and Arizona. Per the polls, Trump holds a 51%-47% advantage over Biden in Florida, and a close 49%-48% in Arizona.

Arizona is the game-changer. It looked as if the state was slipping away from Trump. If the president wins Arizona, and retains the states won in 2016, he’d likely only need to win one of three among Pennsylvania, Michigan, and Wisconsin:

Big news. The scenario I've talked/written about is Trump winning Florida and losing Arizona. Meaning, he'd likely need to win two of three among MI, PA, and WI. If he wins AZ — and holds the 2016 states he won — he'd likely only need to win one of those. It'd be a game-changer. https://t.co/nTcKZD1eF5

Buckle up! If these results below held, Trump would just need to win the rest of the states he won in 2016 and one of Pennsylvania, Michigan or Wisconsin to be re-elected. https://t.co/UrxB2jXkOY

This bodes well for a re-election. This week, Morning Consult released data showing Americans in Big 10 states crediting Trump for the conference’s decision to ultimately play this season. I explained:

“Over half of college football fans surveyed say Trump played at least a role in the Big 10’s return. More importantly, the same 53% of Big 10 fans surveyed agree. 19% of which say the president is ‘completely responsible;” 34% voted ‘somewhat responsible.’

“Only 17% and 16% of college football and Big 10 fans, respectively, say Trump had no part in the decision.

“In 2020, when the two parties agree on virtually nothing, 50% of both say Trump is at least somewhat responsible for the Big 10. Meanwhile, only 29% of Democrats and 31% of Republicans said he isn’t.”