The PGA has just sent a memo to its members regarding the LIV Golf, as OutKick’s Alejandro Avila promised on Wednesday. Among other things, it lists the players “who have decided to turn their backs on the PGA TOUR” and who “are suspended or otherwise ineligible to participate in PGA TOUR tournament play.”

Because these players have violated “Tournament Regulations,” they “will not be permitted to play in PGA TOUR tournaments as a non-member via a sponsor exemption or any other eligibility category.”

The memo, signed by PGA commissioner Jay Monahan, does not say whether the listed players will ever be allowed to return to the PGA, though it does claim that the PGA is “prepared to deal with those questions” with transparency and with respect to “PGA TOUR regulations.”

It also promises to “lift up those who choose to not only benefit from the TOUR, but who also play an integral role in building it.” In other words, those members who haven’t resigned from the PGA in favor of LIV.

Check out the entire memo below: 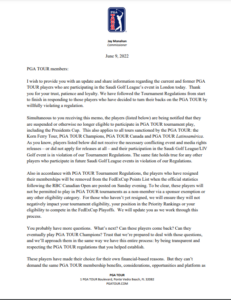 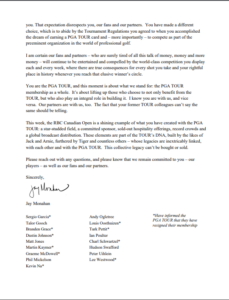