It was clear from the very beginning in December that the Lia Thomas story was going to bring out the kooks who would celebrate a biological male kicking biological female ass in swimming events. Now it’s March and we might have the biggest kook of them all, self-described feminist sports sociologist and Purdue professor Cheryl Cooky, writing for NBC News that Lia Thomas should be celebrated in the same terms as Jackie Robinson.

That’s right, society should celebrate a biological male lowering his testosterone just enough to be eligible to compete in collegiate women’s swimming and then proceeding to win a national championship over three Olympic silver medalists.

What a brave moment in history, Cheryl writes.

“Part of what makes the ‘first’ stories so compelling is the resilience, determination and love for the sport exhibited by these athletes and their motivation to break down barriers, despite the naysayers,” Cooky concludes in her column. “Thomas, as the first transgender athlete to win a Division I NCAA championship, deserves to be placed among the other firsts. She should be embraced in the history of progress that sports represent and recognized as the trailblazer that she is.”

Cooky actually writes that with a straight face (or maybe not) as she celebrates the future destruction of women’s athletics. And this is coming from a feminist.

I’ll give you a couple of guesses on the types of blue checkmark kooks that Cheryl hails on social media: Yep, Jemele Hill, the kook Julie DiCaro out of Chicago that is one of the biggest kooks who’s hailed by her fellow kook community, Dave Zirin, Christine Brennan, Megan Rapinoe and more of the usual suspects.

They’re right there with Cheryl acting like the Thomas story is something to be proud of.

Cheryl was so brave in her stance that Thomas should be celebrated like Jackie Robinson that the Purdue professor turned off the commenting on her link. That’s right, you can’t even celebrate Thomas’ earth-shattering moment in history under Cheryl’s tweet. 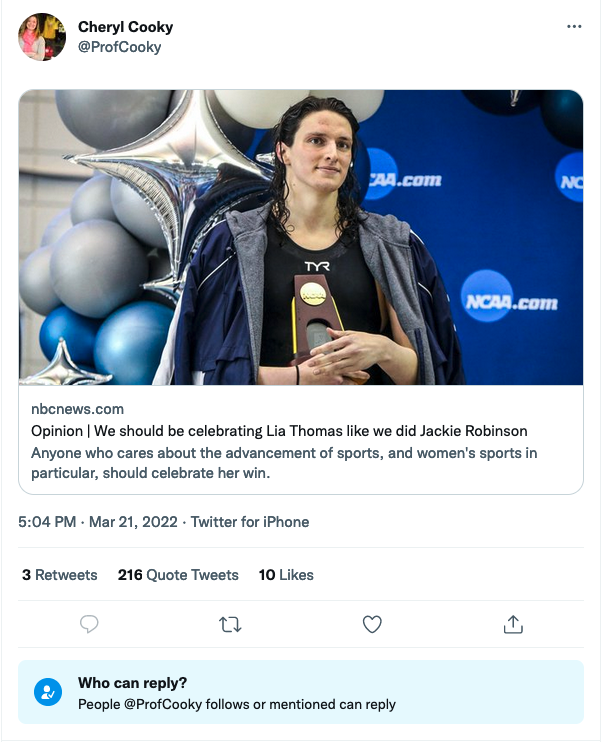 What’s telling about Cooky’s opinion column and all the other blue checkmarks who have opined on this subject is how they don’t have anything to say to the biological women who competed against Thomas.

Cheryl has nothing to say to them. These are the same women Cheryl pretends to care about in all of her other tweets and columns about sports and how unfairly women are treated. Cheryl wrote this entire column and didn’t even mention how the competitors who were in the pool with Thomas were good soldiers and stayed quiet as they were being cheated out of a title and cheated out of the chance to become All-Americans.

And you’re proud of this, Cheryl? This is progress? This is something to celebrate? You’re actually worse than that pussy Pat Forde who wouldn’t say anything as his daughter and her Olympic teammates tried to chase down Thomas in the 500 freestyle national championship.

Deep down, Cheryl Cooky is a check-casher. She doesn’t care about the biological women in that pool. She cares about her street cred within her little blue checkmark circle jerk world where women are told to be good soldiers as some guy plays out his athletic fantasy of becoming a national champion and not saying a damn thing to the women he just beat.

Man wins Women's 500 free – @ESPN: "That's where she [Thomas-male] really took control of the race. Emma Weyant [UVA, Olympian] did as much as she could to hang in there, and did a spectacular job in getting second." #SaveWomensSports pic.twitter.com/gljyl3A1TK

Lia Thomas never answered a single question about how it felt to take away a national championship from Emma Weyant of Virginia who swam her ass off Thursday night in Atlanta.

“Emma Weyant did as much as she could to hang in there, and did a spectacular job in getting second,” ESPN analyst Rowdy Gaines said during the 500 freestyle national championship race.

And somewhere, Cheryl Cooky was celebrating that shameful race for second place.