We’ve officially entered an era when Nike and the NBA compel exploited Chinese laborers to stitch ‘MLK’  on the back of Atlanta Hawk jerseys in the name of woke culture and the almighty dollar. As the NBA Finals TV numbers sink to all-time lows, the NBA and Nike find themselves unable to release themselves from the grips of a movement that pretends to care about humanity but that, with the exception of Rudy Gobert, remains silent about the conditions in Chinese Nike operations.

“Proceeds from the sale of this jersey will go to support economic empowerment programs for Atlanta’s communities of color,” the Hawks said on Twitter.

Nike is now using younger players to convey this message. Last week, Duke showed off Nike jerseys for the 2020-21 season that include “equality” on the back of the jerseys.

Here’s a thought: Nike should open a factory in Atlanta and put Americans to work. Imagine how happy Dr. King would be to see citizens of Atlanta making basketball jerseys with his initials on the front. Now that would be beautiful.

We are more than basketball; we are Dr. King’s LEGACY IN ACTION. #EarnTheseLetters pic.twitter.com/KS3qLOCLdd

Proceeds from the sale of this jersey will go to support economic empowerment programs for Atlanta's communities of color.#EarnTheseLetters x #TrueToAtlanta pic.twitter.com/mYsnzHDsMu

And if you think Nike is going to change the game plan now, you’re nuts. I’ll give you an idea of why LeBron will never speak out about the abuses of Nike workers in China: he has a lifetime deal with Nike, whose stock looks like this over the last five years. 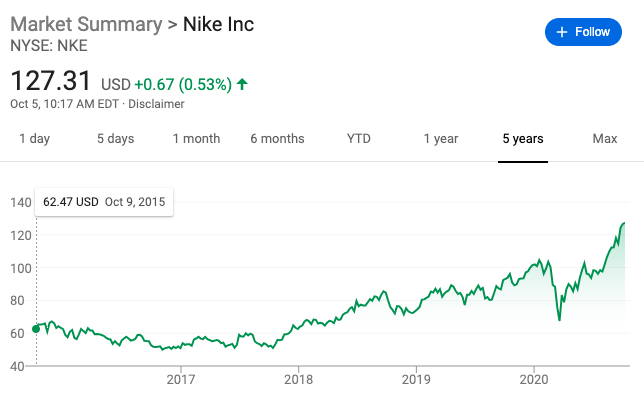