ProFootballTalk founder Mike Florio would like you to stop blaming President Biden for record-high gas prices and instead turn your anger toward local gas station owners.

On Sunday, Florio told his Twitter followers that learned about gas prices while in law schools:

When I was practicing law, I learned how the game works. Higher gas prices always means greater profits for the people selling the gas. They just keep their mouths shut and count the money. pic.twitter.com/zVElytlLfw

We are guessing he failed the test.

“Bring down the price you are charging at the pump to reflect the cost you are paying for the product. Do it now. Do it today. Your customers, the American people, they need relief now,” Biden said at a Wednesday White House event.

Biden is trying to deflect blame away from himself. He’s also inaccurately and unfairly blaming store owners for gas prices.

Store owners do not keep gas prices high for their own benefit. It does not behoove them to overcharge at the pump as they make minimal profit on gas. Fuel pumps are a means to get consumers to come inside a convenience store to purchase food and drinks, products from which the store can turn a higher profit.

A store owner would prefer a buyer spend more money on products inside than on gas outside. And the more a buyer must spend on gas, the less money they have to spend on pop, pizza, and chips.

Other than Florio — and probably Elle Duncan — almost everyone else online understands this:

He is wrong, not surprisingly. Gas stations make minimal profit on gas. They make most of their money on products they sell in their convenience stores. The higher gas prices go the less retail gas store owners make off additional purchases. And the angrier their costumers get. https://t.co/GF1JfQBezx

Isn’t the average profit for a retailer on a gallon of gas after expenses $.02?

Yep. And the higher the gas price, the harder it is to sell food and drinks, the products from which gas stations make most of their profit. https://t.co/kHDhwrDUY8

Good lord. Having grown up in a household where my father owned a gas station at one point, truly amazed Florio could be this clueless.

It has been quite the week for Florio. Before tweeting out gas price misinformation, he got upset that the NFL didn’t comment on the Supreme Court giving states back the power to make their own abortion laws. Florio called women having the right to have abortions in all 50 states “constitutional.”

We can’t say for sure if Florio is confused or is just a partisan hack who is spreading Democratic talking points. Any guesses?

I’m not a “stick to sports” proponent, despite what they say on Twitter. I’m fine with sports pundits speaking out on political topics so long as their network allows someone with the opposite viewpoint to also speak out. That said, it’s often wise to stick to the trade rumors when you continuously embarrass yourself, as Florio has.

No surprise to see these two on the same side: 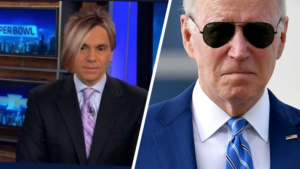