Evidence is mounting that McDonald’s and Wendy’s are lying to their customers about the size of the burgers they sell.

And one man, a New Yorker called Justin Chimienti, isn’t going to take it anymore.

Tuesday, Mr. Chimienti filed a lawsuit against McDonald’s Corp and Wendy’s Co, accusing the restaurants of defrauding customers with ads that make their burgers appear larger than they are.

The burgers in question are the Big Mac and Bourbon Bacon Cheeseburger, two of Chimienti’s favorite lunch sandwiches. 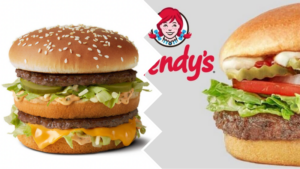 Chimienti alleges that McDonald’s and Wendy’s promote undercooked beef patties in their ads, thus making them appear 15 to 20 percent larger than the burgers that customers buy.

The plaintiffs are asking for monetary damages for all the customers whom Wendy’s and McDonald’s have deceived with their ads.

Chimienti even lawyered up with the best, hiring Anthony Russo, who proposed a similar class-action lawsuit against Burger King last month.

Russo has one job: sue the burger chains for lying about the size of their burgers. Good work, if you can get it.

Though I don’t usually take sides in lawsuits, it’s hard not to side with Chimienti on this one. Give him what he paid for.

In the meantime, I do not recommend you switch to Arby’s while McDonald’s and Wendy’s sort out their issues. This week, police found a video of an Arby’s manager urinating in the milkshake mix before selling the drinks to customers.

Lying about a burger size is dishonorable, but drinking a urine-contaminated shake is arguably worse. That peeing manager is an animal.

Will the days of buying fast food and getting what you order ever return? Well, Justin Chimienti is working on it for you.