Less than a week after Aaron Lewis’ “Am I The Only One” rocketed to the top of the country music charts, liberals are predictably bashing Lewis and his label in a fit of rage that reeks of jealousy. In backing Lewis, the country star’s label referenced the First Amendment and suggested that the popular song serve as a “wake up call” for both political parties.

“Am I The Only One” is an acoustic anthem for those who still proudly salute the American flag. The hit single questions those Americans who favor removing statues, burning flags, and torturing one’s ears with Springsteen songs.

#AmITheOnlyOne live on @TheCandaceShow. Big thank you to @RealCandaceO for having AFL on the show to help bring these four chords and the truth across the country 🇺🇸 Watch the full video at https://t.co/MhQz4ZuriU @realDailyWire pic.twitter.com/LW87QhuWKK

Music critic Bob Lefsetz took offense to the song, calling it “heinous” and “crap” via his newsletter. In the oh-so-typical liberal way of bashing anyone who doesn’t agree with their opinion, Lefsetz went on to call Lewis a “middle class, right wing wanker.” He then questioned why Scott Borchetta, founder of “Big Machine Label Group,” would market Lewis’ hit.

Borchetta quickly responded by dunking all over Lefsetz: “Firstly, I believe in the First Amendment.  My job has never been to tell my artists what to sing and write about.  My job has always been about identifying unique talent with a unique voice and a unique point of view.”

He continued hammering home the point that being so divided helps no one: “Aaron Lewis and I have political disagreements. But there are also things we agree on. I think that’s the foundation for the idea of our country. It doesn’t work if we’re so divided that we can’t reach across the aisle, have a conversation or an argument, and ultimately, shake hands.  If we can’t do that, and this moment is so divisive, we may never get our country back.”

After dismissing the ridiculous idea of “canceling” Lewis, Borchetta suggested that the song could serve as a “wake up call” for both liberals and conservatives: “You don’t have to agree or acknowledge, but Aaron’s message is speaking to millions of people. Let it be a wake up call to reps and dems alike – be loud and be heard! It woke you up. It inspired you to make a statement.  It worked. And it’s working. It’s inspiring conversation.”

Am I the Only One who agrees with Borchetta’s response? I doubt it. 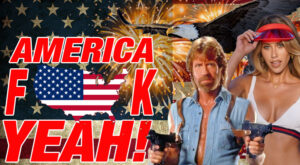