Here are the complete poll results: 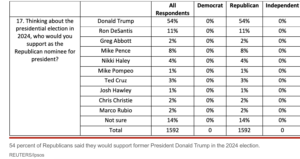 The minimal gap between DeSantis and Pence is surprising, given DeSantis’ popularity among the GOP. Nevertheless, the Republican Party still starts and ends with Trump. Nothing has changed. If Trump announces a bid for 2024, he will enter the primary as the prohibitive favorite.

Trump has not announced his plans for 2024 but continues to suggest he will run. His former White House press secretary Kayleigh McEnany put the chances that he does at “110%.” Not bad odds there, either.

President Joe Biden says he will run in 2024 if he’s healthy and claims that Trump running opposite him would increase the likelihood he runs, no matter what. Take that as you wish. But Biden may not be the Democrats’ top choice. Both CNN and the New York Times are already looking over Biden’s shoulder. Based on CNN’s list of potential Democratic candidates, the other options are not appealing. Take that also as you wish.

It’s only 2022, but people are already getting excited.