Remember when Kevin Harvick was old, washed up and would never win a race again?

Busch Lights for everyone!

“I think as it got dark, the racetrack really came to our Mobil 1 Ford Mustang,” Harvick said. “The cars have been running good week in and week out, and you see that we have a lot better understanding of what’s going on with how we adjusted on the car after the first run and were able to get our car handling a lot better.

“I want to say hi to Piper and Keelan, Delana and everybody at home.”

A winner AND he gets brownie points back home. Veteran move!

Harvick won for the 60th time in his career Sunday at Richmond, and kept the playoff picture somewhat steady with two races left in the regular season.

That’s because he held off Chris Buescher, who was shockingly fast all afternoon and nearly chased Harvick down for what would’ve been a disastrous win for several guys near the playoff cutline.

Looking at you two, Ryan Blaney and Martin Truex Jr.

Buescher, though, fell off at the end and will now head to Watkins Glen and Daytona needing a win to break through those pesky playoff doors.

Kyle Busch, how was you afternoon?

“We got ‘Chastained’ this week. We were his victim this week,” an always cheery KB said after he was spun by Ross Chastain and ultimately finished ninth.

Frankly, I don’t know why Ross Chastain HATES Joe Gibbs Racing, but it’s a bold move to pick a fight with guys like Kyle Busch and Denny Hamlin.

No, I don’t think Chastain is actually doing this on purpose, but Ross, buddy … this is becoming a weekly thing!

By my count, Chastain has had run-ins with every single JGR driver this season. This week it was Busch, but most weeks it’s been Hamlin, who retaliated at Pocono by putting him into the wall on a late restart.

Don’t think that makes the two guys even, though.

“The latest caution is brought to you by Ross Chastain,” radioed Hamlin’s crew chief, Chris Gabehart, after Sunday’s wreck.

Before we move off Rowdy, let’s quickly talk about that back and forth with Ty Gibbs midway through Sunday’s race.

Anybody else feel the tension through your colored TV screens?

Busch gave Gibbs a nudge up the track during a pass, and the 18-year-old responded by punting Busch a few laps later. Talk about a bold move!

Normally this would be a brotherly battle.

Anyway, the rumblings in the garage are contract talks ain’t going too well between Busch and Joe Gibbs, and that may be because 81-year-old Joe wants to see grandson Ty in the No. 18 Toyota next season.

Doesn’t appear Kyle is ready to pass the torch, though. I wouldn’t push it too much, either, Ty.

We can’t go to Watkins Glen before first talking about Bobby Labonte.

The former Winston Cup (the ONLY name for the Cup Series, by the way) champ revealed he’s been dealing with some pretty serious health stuff over the past few years during a segment on FOX.

Apparently, Labonte, an analyst for NASCAR on FOX, discovered a spot on his kidney in 2019, it “tripled in size” two years later, he had it successfully removed but was told it can be a “very aggressive” form of cancer for those who don’t catch it early.

“One-third of the patients that are diagnosed with this don’t make it,” he said. “Usually, I’m not the share type of guy and you won’t know a lot of things about me, but it didn’t take me long to figure out if we could help one person, just help one person, man.

“There’s a ton of cancers out there that can be treatable for sure and this was one if you catch it early, like we did, we were fortunate enough to be able to take care of it.”

Sounds like all is now well for Labonte, who returned to some racing earlier this year. And, since we just got done talking about Kyle Busch …

The No. 18 Interstate Batteries car will always belong to Bobby Labonte. Talk about an underrated scheme from the 1990s that was NASCAR at it’s absolutely PEAK.

That, folks, is when racing was racing.

As we had to Watkins Glen for the penultimate (best word in the dictionary, by the way) race of the regular season, I’ll leave you with an Instagram video of Truck Series driver Hailie Deegan going absolutely insane during an ice bath over the weekend.

And by insane, I mean kicking and screaming until she just couldn’t take it any more.

That was a wild ride. She threatens her boyfriend with a right hook before even getting in, and then things take an unreal turn about 10 seconds after she gets in with the loudest scream you’ll ever hear. 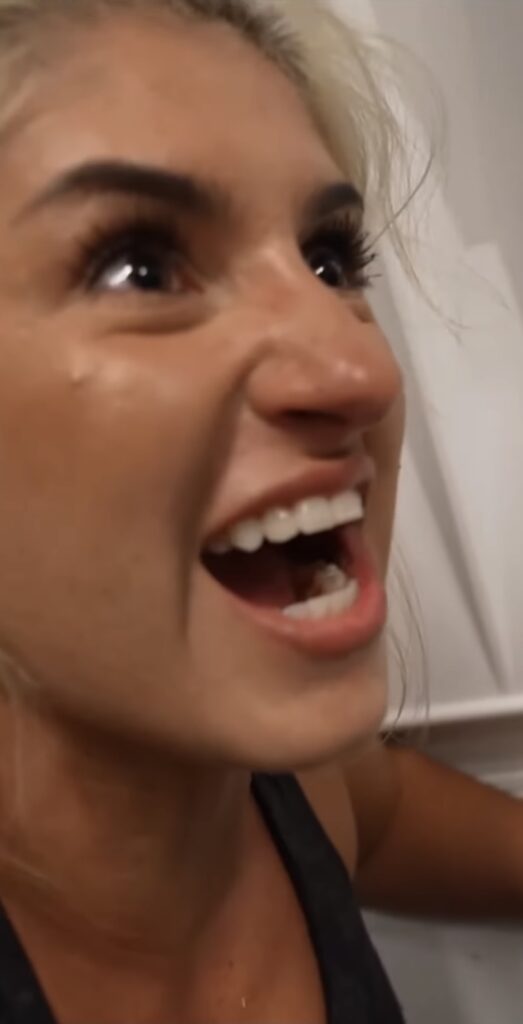 All right, off to the Glen!