JJ Watt wasted no time heading to the tropics after a brutal season that saw the Texans finish 4-12. At one point during the fall, he went off on a two-minute lecture on how players should care about each and every game, even when the team is playing out the season. Watt has to be absolutely exhausted after what he just went through. The 31-year-old defensive end played all 16 games and has to be mentally wiped out.

Enter what appears to be a Hawaiian vacation with his wife, Kealia Ohai Watt, that has caught the attention of athletes, media blue checkmarks and Karen Rovell.

Back home, Texans QB Deshaun Watson is mad at the organization for not including him in the hiring process for the next coach, and Watt appears to be nearing a trade to a team where he can make a Super Bowl before he closes out his Hall of Fame career.

“It’s a wrap,” a source told CBS in November. “He knows he only has so many games left and he is ready to go and try to win. The guys in that locker room are bracing for it.”

Another source told CBS that Watt would be traded by March due to medical evaluations that still need to take place.

For now, it appears JJ’s not worried about anything besides waves, eating fresh fruit, protein shakes, maybe a nice cut of meat, and looking off into the ocean thinking about where his career is headed. Get ready for many deep thought Instagram posts from this guy. 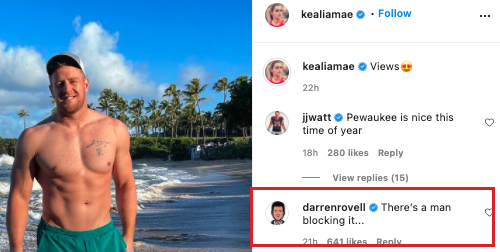