The ‘Tank for Trevor’ campaign has had a huge week in Jacksonville where players are being shipped out, draft picks are being collected at a rapid pace and there’s even rumblings of a Dabo-Lawrence package deal in 2021.

The latest player shipped out is safety Ronnie Harrison who was traded to the Cleveland Browns today for a 2021 fifth-round pick that joins a pretty incredible stash in the next draft. Harrison joins Leonard Fournette (released) and Yannick Ngakoue (traded to the Vikings) as players who’re out as the tank mode fully engages September 13 at home against the Chargers.

Harrison, who is entering his third season, had 22 starts for the Jags over the last two seasons. The Browns needed a safety after rookie Grant Delpit went down with a season-ending injury and the Jags are looking to shed good players. It’s a win-win for both teams.

here's a list of the 2017 AFC South Division Champion Jaguars players still on the team pic.twitter.com/RwdWYw213j 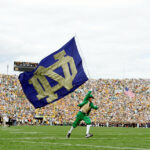