‘Boss Bitch’ Holly Sonders continued her Real Talk Express® tour on Wednesday on the eve of the Masters, and it didn’t take long for one of the “super golfy, super ridgy” golf nerds to weigh in with yet another question as to why she’s gone down the OnlyFans-esque road.

By now, you should know that Holly’s going to give you a legit answer. She doesn’t have time to play with you golf nerds. You want an answer? Here’s your answer. You might not like it, but it’s not your life to live.

“Why are you doing these photos and not golf,” the golf nerd asked on Instagram.

“Because I don’t love golf. I’m not passionate about it,” the former Golf Channel darling explained to guys who used to tune in to see her crank off a driver.

“I also make 20X as much money ‘doing [these] photos’ as compared to my salary at Golf Channel. Literally 20X.”

Now, I’m no mathematician, but I can use a calculator on my phone to determine a ballpark range for the money she’s talking about here. It’s safe to say Golf Channel talent made low six figures to high six figures. Again, I’m no expert here, just spitballing.

Now, I know from previous OnlyFans reporting that an ex-British cop was on pace to make $2.3 million on the paysite. And former race car driver Renee Gracie reported last summer that she was banking $25,000 a week. Just last week, ‘Cash Me Outside’ girl made $1 million in six hours.

My guess: I have Holly at about $2.5-$2.85 million in projected earnings for 12 months. Remember, she has been dabbling in merchandise sales and a CBD partnership. 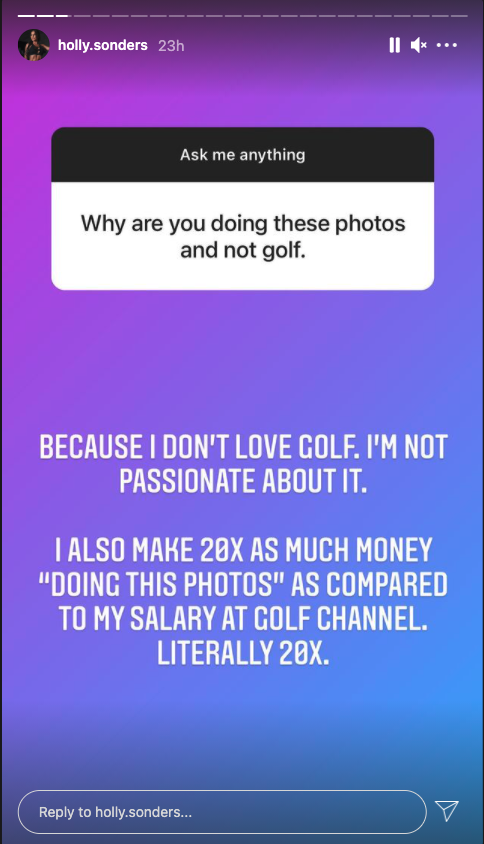 Hola bitches. Who wants to chat some more today? pic.twitter.com/aeHF0EXC0F