Oh, you thought Stetson Bennett reached “legend status” in Georgia when he won a national title earlier this year?

Little did you (or I) know, you’re not a true SEC football God until you’ve been turned into a fall maze.

Now, Stetson Bennett has achieved legend status in the great state of Georgia. 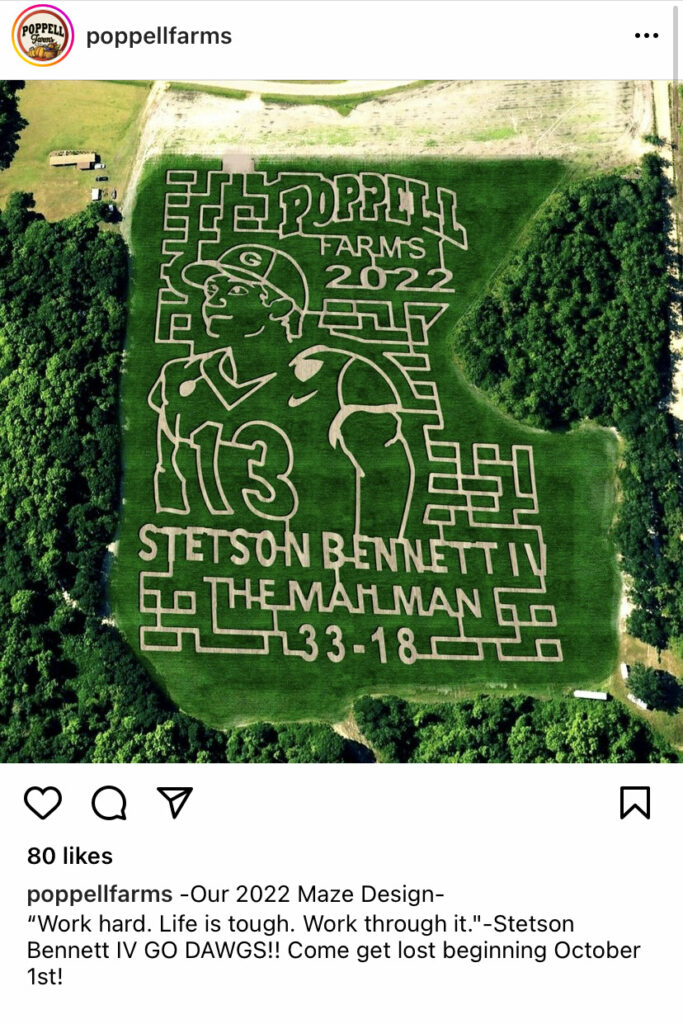 You know, they say it does just mean more in the SEC, and this is a prime example. And how about the national title game score at the bottom?

Good luck finding your way through that, Nick Saban!

College football is back and Labor Day weekend is loaded

People in the south (raising my hand) love this time of year. The minute that calendar turns to September, everyone is instantly in a better mood.

Labor Day weekend is sneaky one of the best weekends of the entire year, too. It basically started yesterday with two insane college football games, and carries right on through to Monday.

You get more games tonight, a jam-packed Saturday slate, more games on Sunday, NASCAR’s Southern 500 at Darlington Sunday night and then a day off Monday with even more college football games.

And, oh, by the way, when we get to Monday … it’ll officially be game week for the NFL.

Have yourself a weekend!

The former walk-on guided the Dawgs to a national title in January, and decided to come back for one more season to run it back. Georgia opens against Oregon this weekend, but it appears Bennett’s legacy is already cemented in Poppell Farms, win or lose.

“His personal story is amazing, one of true grit and determination,” Tonya Poppell told The Press-Sentinel. “From a walk-on to a champion, what an extraordinary inspiration!”

“We knew right away that if we could make it happen, we would love to feature Stetson in our 2022 maze. Getting permission and choosing the final design was a collaborative effort between many folks. We have been actively working on this since the championship game.”

This bad boy is open to the public starting Oct. 1, so break out that atlas and start drawing up a plan to get to Odum, Georgia so you can get lost in Stetson Bennett’s bicep.