Because ESPN is afraid that broadcaster Mark Jones will call the network racist, ESPN allows him to embarrass the company.

Following the Packers’ loss to the 49ers, Jones shared and liked several tweets tying Aaron Rodgers to QAnon, Donald Trump and a half-horse/half-human. Take a look: 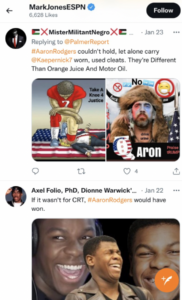 That is how a guy on ESPN’s payroll spent his weekend.

Most notably, Jones said he planned to refuse police escort to a college football game because police are more likely to shoot black people dead than follow through on a planned escort.

If you are the NFL, UFC or a college football league, it has to be disturbing that a league partner allows a broadcaster to openly root for athletes to suffer injuries.

Moreover, Mark Jones is a liar. Last spring, Jones falsely claimed during an NBA game that Jacob Blake was “unarmed” when the police shot him in 2020. Jones must have missed Blake’s telling of the event. “Yeah, I had my knife,” Blake responded when asked about the shooting.

Jones is a disturbing creature. And for those keeping track, ESPN has declined to comment on each Jones incident. ESPN is afraid that if it condemns Jones’ behavior, Jemele Hill or the angry weekend lady at MSNBC will say that the network silences a black voice. So ESPN lets Jones continue.

Mark Jones is taking advantage of ESPN’s cowardice. I have never called for anyone to lose their job. However, don’t you have to fire someone for idiocy at some point? Because anytime Jones mentions something other than ball, he proves his ignorance.

Aaron Rodgers told Pat McAfee Tuesday that the media roots against him because not vaccinated. Case in point: a radical racist called Mark Jones.