ESPN’s Mark Jones, best known for his NBA and college football assignments had quite the meltdown Wednesday, after the Breonna Taylor grand jury decision was announced. Jones, who has worked at ESPN since 1990, made it very clear Wednesday that he doesn’t need the help of police.

“Police never saved me. Never helped me,” Jones tweeted. “Never protected me. Never taken a bullet for me. (They’ve pulled guns on me) Never kept me safe in a protest. Never stopped the racist from taking my Black Lives Matter flag off my house. I could do without em. fr.

“Saturday at my football game I’ll tell the police officer on duty to “protect” me he can just take the day off,” Jones tweeted. [For real] I’d rather not have the officer shoot me because he feared for his life because of my black skin or other dumb ish. I’m not signing my own death certificate.”

2020 Mark Jones must’ve forgotten about 2011 Mark Jones tweeting how much he loved cops helping him avoid traffic at places like Knoxville, Tennessee or in other crazed college football cities. Let’s embed these tweets, but I’m also going to save the screencaps in case Mark tries to pull a fast one on the Internet and delete these.

I'm not going to lie. I love our police escorts to the stadium. Saves us a good 40 min to 1 hour of not waiting in traffic.

Police escort to the Neyland Stadium and the game ! Gotta get to that announce booth.I sit in FRONT http://t.co/76MEpTSr

Traffic never looked so good in ATL on I75/I85. You must have a police escort. Lol. https://t.co/4fyc0deXfD

S/o to the Syracuse Police Dept who helped me secure the 💼 today. I appreciate y’all. Keep up the great work. Real professionals👏🏾👏🏾🙏🏾 pic.twitter.com/RytChETJ6E

It’s unclear when Mark Jones turned from posting positive things about cops here and there to full-on radical anti-cop. Here’s a nice moment from 2016 where Jones appreciates what officer Tommy Norman is doing in the Little Rock, Arkansas community. Jones hasn’t mentioned Norman since. If you go over to Norman’s Instagram page, he’s still going strong as a bright spot in the community.

Sir, you have worked for ESPN since 1990. How many times has the officer assigned to protect you shot at you? I'm assuming there is security whenever you are on assignment. I am asking seriously. 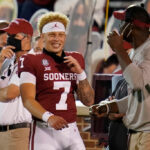 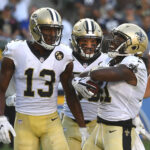