Mark Jones, one of the most promoted play-by-play commentators on ESPN, is again mocking people’s injuries because of their political beliefs.

Last night, Jones began liking random tweets from accounts with under 200 followers because they made fun of UFC fighter Colby Covington for suffering a broken jaw in a fight over a year ago. Jones is not some UFC fan who has gotten wrapped up in the brutality and art of the sport. Jones is cheering Covington’s facial damage because Covington has previously expressed support for Donald Trump. 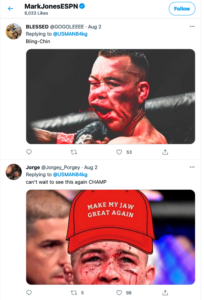 This is not the first time Jones has cheered when people have gotten injured. Less than a year ago, Mark Jones liked several tweets praising the NFL player who ended “MAGA” Nick Bosa’s season: 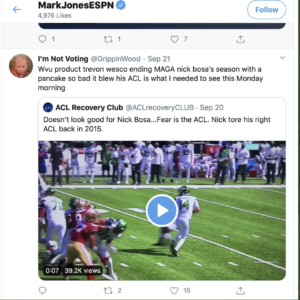 Think about how miserable Jones has to be to enjoy Bosa and Covington’s injuries. That’s not passion — that’s hate. Yet, his bosses at ESPN still refuse to discipline him. Apparently, ESPN thinks an athlete’s suffering is rather amusing as long as he or she is conservative.

But of course, Jones does not limit his hatred to athletes alone. Earlier this year, Jones celebrated Rush Limbaugh’s death moments after Limbaugh’s wife, in tears, announced he had died of lung cancer.

Limbaugh may have been a controversial figure, but he was also a human being with a life and a family. Agree with his opinions or not, his family, friends, and supporters were grieving at that moment, just like so many families do when they lose a loved one. Anyone who celebrated his death is enjoying the pain of a family.

Unsurprisingly, ESPN refused to comment on Jones’ tweets about Limbaugh. Jones got away with that one too.

As sick of a man as Jones is, the responsibility falls on ESPN executives. Because Mark Jones is a black man who likes tweets attacking conservative white men, ESPN is afraid to acknowledge Jones’ behavior. Instead, ESPN’s mostly white executives feel obligated to prove they are not racist, which includes making exceptions to corporate policies for black employees. It’s pathetic.

If a white, male ESPN broadcaster had sent or liked any tweets that celebrated an injury to a liberal, black athlete — ESPN would’ve fired him before Jemele Hill even got the chance to weigh in.

ESPN has different rules for white men, white women, black women, black men, liberals, and conservatives. At ESPN, the pyramid of victimization decides which rules and exceptions to enforce. Because of Mark Jones’ skin color, politics, and supposed enemies — he has the green light to say and do whatever he wants.

Saturday at my football game I’ll tell the police officer on duty to “protect” me he can just take the day off. Fr.

I’d rather not have the officer shoot me because he feared for his life because of my black skin or other dumb ish.

I’m not signing my own death certificate💯

Police never saved me.Never helped me.Never protected me.Never taken a bullet for me. (They’ve pulled guns on me)
Never kept me safe in a protest. Never stopped the racist from taking my Black Lives Matter flag off my house.
I could do without em. fr. #BreonnaTaylor. #Defund12

Jones is also allowed to call the sitting president a terrorist. Don’t worry, he did so while Donald Trump was still in office:

So @MarkJonesESPN is calling the Army football game this weekend. Earlier this week he rt’ed that @realDonaldTrump was a white supremacist terrorist. Good move @espn. pic.twitter.com/lx00Hm62po

In April, Jones went on national TV during an NBA game and announced to millions of viewers that the police shot Jacob Blake while he was “unarmed.” That’s a lie. Blake admitted that he had a knife in his possession, video footage showed Blake carrying a knife, and investigators found a knife in Blake’s vehicle.

Mark Jones is a creep and a liar, and ESPN chairman Jimmy Pitaro doesn’t feel he has the job security to do anything about it.

He certainly won’t say anything to Jones about this latest attack against Colby Covington. By doing nothing, Pitaro sends a clear message: select broadcasters at ESPN are now allowed to mock UFC certain athletes with impunity. ESPN and the UFC are broadcast partners. The UFC must be furious that their exclusive partner would condone this type of behavior, and make no mistake, by remaining silent, ESPN is condoning it.

I don’t call for networks to fire anyone. But Mark Jones is disturbing, hateful, racist, and — quite frankly — so replaceable that his downside has long outweighed whatever upside ESPN saw when it elevated him last year.