Florida Gov. Ron DeSantis rejected an invitation to appear on The View. 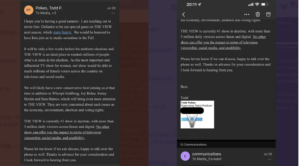 “I hope you’re having a good summer. I am reaching out to invite Gov. Ron DeSantis to be our special guest on THE VIEW next season, which starts Sept. 6. We would be honored to have him join us in studio sometime in the Fall,” Polkes wrote.

DeSantis’ deputy press secretary Bryan Griffin responded to the invite with a list of times that The View baselessly smeared the governor:

Here's our response to @TheView: pic.twitter.com/dyLNl9qexH

“We will pass on this offer,” Griffin responded.

It’s unclear if the angry ladies would have gone through with the interview had DeSantis accepted his invitation. The idea of the show is to surround the crew with guests equally dumb and uninformed, after all.

The cast doesn’t do well when someone pushes back — see Morgan Ortagus’ 4-on-1 takedown of the program’s characters.

Unfortunately, the show won’t get any better with incoming co-host Alyssa Farah Griffin. ABC strategically picked a “conservative” co-host who hates DeSantis as Joy Behar and her sidekicks do.

“He should be criminally liable for that,” she told Whoopi Goldberg.

In June, Sunny Hostin called DeSantis a “fascist” and a “bigot” in the same segment. Interesting.

You can always count on The View women to provide in-depth analyses of their favorite subjects. DeSantis could have gone on to steamroll this bunch, to make them answer for their obsessive attacks.

It would have been good TV.