ABC will name Alyssa Farah Griffin the new “conservative” co-host on The View.

Griffin replaces Meghan McCain, who left the show in 2021. People Magazine first reported the news Monday but did not specify whether Griffin would continue as a contributor on CNN.

Of the fill-ins, former State Department spokesperson Morgan Ortagus and former NBC NFL reporter Michele Tafoya pushed back the hardest and created the most buzz. They must have been too tough for the main cast to handle.

The View had struggled to find the “right kind of conservative,” Politico reported earlier this year. ABC did not want someone who oozed MAGA.

While Griffin was White House Director of Strategic Communications and Assistant to President Trump, she now spends much of her airtime on CNN bashing the former president. So, she passed the test. 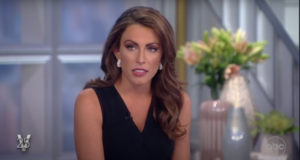 What do her soon-to-be new co-hosts think of the move? They don’t like it. Stunning.

According to the Daily Mail, the angry View ladies feel Griffin isn’t “authentic and changes her opinions based on who her paymaster is.”

“Ana Navarro especially feels let down as they are hiring someone who was an essential part of the movement that destabilized this country,” the outlet adds.

Whether Griffin is a grifter or not, the show will remain brutal. There is not a dumber program on television, aside from ReidOut.

Just look at the confusion from a clip in 2020:

Whoopi Goldberg suggests Jill Biden become Surgeon General of the United States because she's an "amazing doctor." The mindless audience of The View clap like trained seals at the idea. pic.twitter.com/WW7QL8fqoW

Whoopi Goldberg isn’t even the worst “talent” on the desk. That’d be Joy Behar. Here’s a look at what Behar has been up to.

The View ends its 25th season in August. Alyssa Farah Griffin will join the show officially for year 26.