Dave Chappelle’s surprise role as a tackling dummy was anything but funny. But the comedian says that any Tuesday night post-tackle comments linking his entertainment friends to a beat down on his assailant, were just jokes.

Following the Hollywood Bowl incident, Chappelle was heard praising Jamie Foxx, Busta Rhymes and Jon Stewart for physically involving themselves with his attacker, whom has since been identified as Isaiah Lee.

“I felt good. My friends broke (Lee’s) arm,” Chappelle told an after-party crowd in a recording obtained by TMZ. “How bad does a (inaudible) have to be that Jon Stewart would stomp him?”

Carla Sims, a spokesperson for Chappelle, told TMZ that any mentions of Chappelle’s famous friends attacking Lee (Chappelle acknowledged Foxx and Rhymes on stage in the moments following the attack) were nothing more than the comedian’s way of creating content and adding humor to a not so funny situation. Sims continued, insisting that  Foxx, Rhymes nor Stewart did not throw any punches. 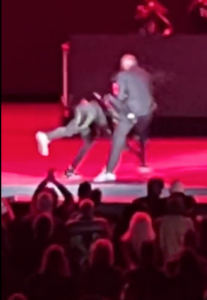 Lee, on the other hand, was very much involved in the melee and, in turn, likely faces the prospect of having to lick his wounds from behind bars. Los Angeles prosecutors have filed four misdemeanors against the 23-year-old Lee, though the District Attorney will not pursue any felony charges.

Per NPR, Los Angeles attorney Mike Feuer says he plans to “vigorously prosecute this case” with misdemeanor charges: battery, possession of a weapon with intent to assault, unauthorized access to the stage area during a performance and commission of an act that delays the event or interferes with the performer.

Don’t expect to hear any testimony from Foxx, Rhymes or Stewart.