After two years of being told by the mainstream media that severe lockdowns were the only path to saving society from COVID, researchers have analyzed data to give citizens a better idea whether government policy had positive results for those it says it was protecting.

In their study titled “A FINAL REPORT CARD ON THE STATES’ RESPONSE TO COVID-19” for the National Bureau of Economic Research, University of Chicago economist Casey Mulligan and Stephen Moore and Phil Kerpen of the Committee to Unleash Prosperity examined data from three variables: the economy, education and mortality, which were the three major talking points from government agencies in their battles against COVID.

Remember, we have to lock you down to save your life, but it’s going to be crushing to the economy and your child’s education.

And after analyzing the data available to them, the research shows that states with iron fist rules to crush COVID actually crushed public education and stifled their economies while having very little to no benefit on the mortality rate.

In New York, where accused pervert Andrew Cuomo was considered a hero because he held highly-visible press conferences daily and had Big Media cheering him on, the actual response to COVID didn’t have a “payoff,” as the Wall Street Journal calls it.

Cuomo’s state finished 49th (if you take out D.C.) out of 50 states, with only Phil Murphy in New Jersey having a worse COVID scorecard based on the metrics used by researchers. The data shows that Cuomo and Murphy were actually failures. 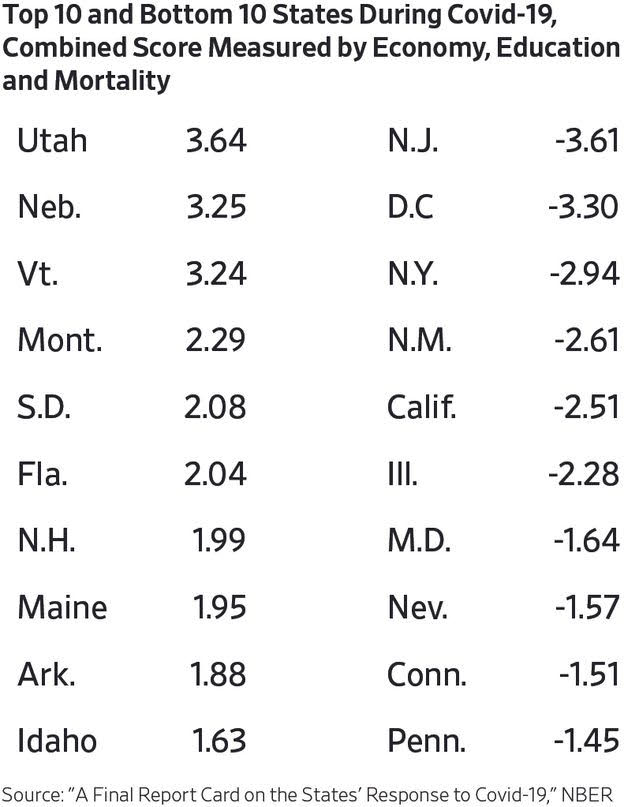 Yeah, but we saved lives!

The researchers argue based on the data that sheltering the vulnerable was a strong response from government agencies.

“Whether or not political leaders can be considered responsible for mortality outcomes is therefore unclear, although advocates of a ‘focused protection’ strategy have suggested that sheltering the high-risk could reduce overall mortality – an approach adopted by Florida.”

The data is clear as to what the draconian policies did to state economies.

“Shutting down their economies and schools was by far the biggest mistake governors and state officials made during COVID, particularly in blue states,” researcher Stephen Moore said Monday.

Maybe you still don’t believe the data and the research presented. Perhaps you’d like to see the data that continuously shows people escaping those locked-down states. Analyze the U-Haul data. Look at the data straight from the Chicago Public School System that showed over 100,000 children were expected to drop out of the school system heading into the 2021-22 school year. Come up with your own conclusions.

Or keep believing your blue state government agencies had your best interests in mind. You make the call.