How bad is the quarterback situation in Carolina? Bad enough that the team may bring Cam Newton back. Again. Though he’d first have to agree to play backup and take a pay cut, Newton may once again sign on with the team that made him a star so many years ago.

The Charlotte Observer says that the Panthers are “open” to reaching a deal with Newton. GM Scott Fitterer said that he and Newton, 33, maintain a good relationship and that they recently ran into one another at the Kentucky Derby:

“I think we’re still having thoughts. We have to see how this works out here throughout the spring. I just happened to be up at the [Kentucky] Derby last weekend and Cam was up there. We’re texting a little bit.” 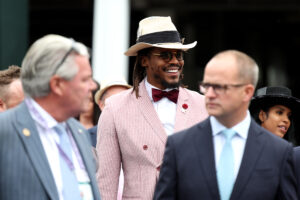 “The lines of communication are open,” Fitterer continued. “I know Coach (Matt) Rhule has spoken with him. We are going to have a discussion at some point, but we’re just not quite there yet. But we’ll see how it goes. The more competition we have at that position, the better.”

And who exactly would be Cam’s competition, should he re-sign? For now, Sam Darnold is still slated to be the starter. Though Darnold, 24, is often injured and has never quite lived up to the hype surrounding him when the Jets drafted him third overall in 2018, he still remains QB1. He even started the 2021 season 3-0. However, they were 4-5 by the time he fractured his scapula against the New England Patriots in November and was sidelined for six weeks.

With Darnold out, the Panthers signed Newton to a one-year contract for $4.5 million plus bonuses and other incentives, but the team went 0-5 with Newton back under center and the Panthers ultimately finished the season a disappointing 5-12.

Now that Darnold has fully recovered from his injury, he is the projected starter once training camp begins. The Panthers also now have rookie QB Matt Corral out of Ole Miss.

Which brings us back to Newton. Newton certainly has talent and an on-field presence. Perhaps too much presence. He contended that the Patriots let him go after they’d named Mac Jones the starter out of training camp last season because his “aura” doesn’t allow him to play second string.

Cam Newton says the Patriots would have released him regardless of him missing time. pic.twitter.com/V3CEMDzzdR

Plus, it’s hard to put the band back together. Cam and the Panthers had a solid ride together from 2011 until about 2017, but that was five years ago, which is more like twenty in NFL years.

Whatever happens, we wish both Newton and Carolina the best, whether they get back together this fall or just agree to remain friends.