A Google trends chart showed that First Lady Jill Biden comparing the diversity of the Hispanic community to tacos is one of the top stories of interest in the country.

According to Mediaite reporting, MSNBC, the New York Times, Axios, and Vox are ignoring the story completely. One could argue that media outlets dismissing the Hispanic journalists who say Jill’s comments were offensive and stereotypical are being a tad racist.

Most notably, ABC has buried JillGate on newscasts that air from 2:00 to 4:00 a.m. So unless you stumbled home drunk Wednesday morning and caught the news, you might have missed it. 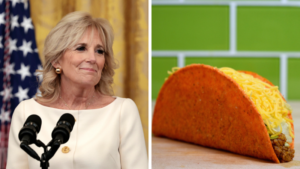 Imagine if the spouse of a Republican president had made a similar remark. The ABCs, CNNs, and MSNBCs would have it on the airwaves wall to wall. And each would use the R-word to describe it.

For comparison, these same media outlets spent days psychoanalyzing a tweet from Trump in 2016 that said “I love Hispanics” next to a photo of himself eating a taco bowl.

CNN included the comment in a list two years later, making the case that Trump is “insensitive” and “racist.” So did Axios, calling it a “racial controversy.“

Instead of facing this type of backlash, Jill is receiving support from media figures. Whoopi Goldberg, one of the angry ladies on The View, defended Jill, saying we all make mistakes.

“We all step in poo from time to time, and so this happens,” Goldberg said Tuesday.

What is it with these people and their comparisons?

I must say, it was more fun when the media at least tried to hide its double standard. Sadly, it’s so out in the open now that it’s almost too easy to mock.

PSA: you can compare Hispanics to tacos only if you are a Democrat.