The 2020 NBA Finals, led by LeBron James and the Lakers, tanked to historical lows. Yet, the media is aggressively trying to distract from the conversation. Aside from OutKick, few other outlets have touched the topic that triggers woke sports media Twitter accounts, but one of them is Bill O’Reilly at The First.

“The NBA: done,” O’Reilly began on No Spin News. “LA Lakers won, who cares? Does anyone care?”

Based on the ratings, no.

“The fifth game, went from 18 million viewers last year to 5.7 this year,” O’Reilly went on. “Why? Because Black Lives Matter [and] political slogans.”

“Do we want it during the game? Obviously, not.”

O’Reilly came to the same conclusion I argued last week: LeBron has ruined the league.

For two decades, LeBron lifted the NBA back into the discussion and grew its popularity. Today, he is an off-putting, politically reckless detriment.

He promotes misleading social statements, silences critics of the Chinese Communist Party, pretends to put human rights before his brand, and refuses to comment on the shooting of LA police officers, all while demanding to be worshipped.

ABC and the NBA were confident LeBron would bring the Finals back. Instead, he attracted even fewer viewers than a team from Canada was able to draw last year.

O’Reilly also blamed LeBron’s strong and unwavering support of Colin Kaepernick for his fall from favor. Recently, Kaepernick has irresponsibly called for the abolition of police and prisons.

Here is LeBron rocking a Kaepernick shirt and supporting his wishes in the locker room: 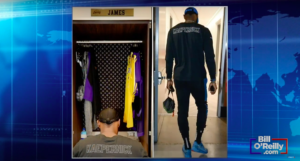