Apple made its live sports debut on Friday, with the exclusive broadcast of the Mets-Nationals matchup.

In addition, there’s extra attention on the game because it’s Max Scherzer’s first as a New York Met.

So if you think downloading the AppleTV+ app just to watch a baseball game is inconvenient for you, just think about the 70-year-old uncle in Queens yelling at his wife right now because he doesn’t know what an AppleTV+ is.

Old-timer Mets fans pay good money to watch every single Mets game on SNY. Therefore, stripping away their cable access for Scherzer’s debut is surely not going over well in households across New York.

We can report, however, that 2022 Woke All-Star Keith Olbermann was able to successfully locate AppleTV+ on his television. Nevertheless, MLB on Apple doesn’t impress Mr. Olbermann. Here’s his official grade:

Apple TV Mets-Nats: early returns: pxp has potential but has yet to take a breath and sounds like radio. Analyst referred to Pete Alonso's helmet face shield as a "chin strap." And turning the walk-up music into a promo for Apple Music reeked of the Home Shopping Network: C-

Obviously, Olbermann’s opinion doesn’t carry much weight. No one likes him. However, people far more sane and credible also disapprove of the broadcast. For example, look at these random accounts complaining on Twitter:

This Apple TV broadcast is an absolute disgrace. Whoever these announcers are couldn’t call a high school field hockey game. Jesus fucking Christ. They couldn’t hire a professional?

@SNY_Mets Mets on appleTV is just not it… missing the crew!!! @Mets

This @AppleTV broadcast of the Mets is AWFUL. Time to mute it and listen to the best in the business @HowieRose

I'd almost rather watch this game on mute than hear these Apple TV announcers. Just terrible. #NYMvsWSH

OMG I can’t with these @AppleTV announcers. Never did I think I would ever say give me @keithhernandez

Baseball fans can’t stand Apple’s broadcast booth. Apple is trying to spice up the game with untraditional voices. Melanie Newman (play-by-play), Chris Young (analyst) and Hannah Keyser (analyst) are the trio on the call tonight. It’s true. They are that bad.

At least baseball analyst Katie Nolan — yes, the one from ESPN — will work Apple’s second game of the night, the Houston Astros vs Los Angeles Angels at 9:30 p.m. ET. Plan accordingly.

On the bright side, the picture quality on Apple is top-notch, better than on TBS, and the score bug is simple. Take a look: 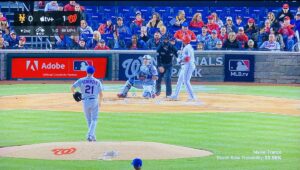 And for those who have figured out how to download AppleTV+ — a group that does not include Chris “Mad Dog” Russo — they should have no issues finding the play button. It’s the first option that pops up when you open the app: 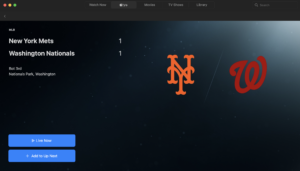 I don’t mind MLB on Apple. But everyone else hates it. Darn.

Related story at OutKick: Streaming Is A Disservice To Sports Fans.